This Solar Tent Has Heated Floors, Wi-Fi, and It Illuminates at Night 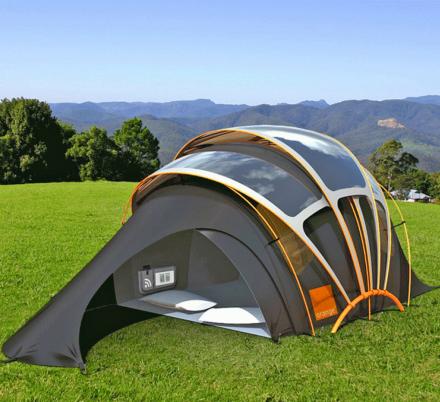 We've feature plenty of luxurious ways to go camping in the past, including an RV with a built-in garage, bubble tents, tents with private bedroom compartments, and more, but this new tech filled tent might just take the cake (as far as tents go, cause I'll take that RV any day). It's called the Chill n’ Charge Solar Tent, and it's filled with incredible technology, including heated floors, a wireless charging area, wi-fi integration, and it even illuminates in the dark. A retractable solar panel array sits atop the unique tent to power it all!

The solar tent is a concept tent designed by Kaleidescope Design for the French Telecom company Orange who hoped to use the tent at Glastonbury music festival in the UK to assist festival-goers keep their bearings at night, as well as keep in touch with friends and family. They designed the tent with a "Glo-cation" technology that would allow the users of the tent to find it by sending an text message or using an automatic RFID tag similar to the ones used in London's Underground Oyster subway cards. Once the tent receives your message, it would glow in response to help you find it easier. 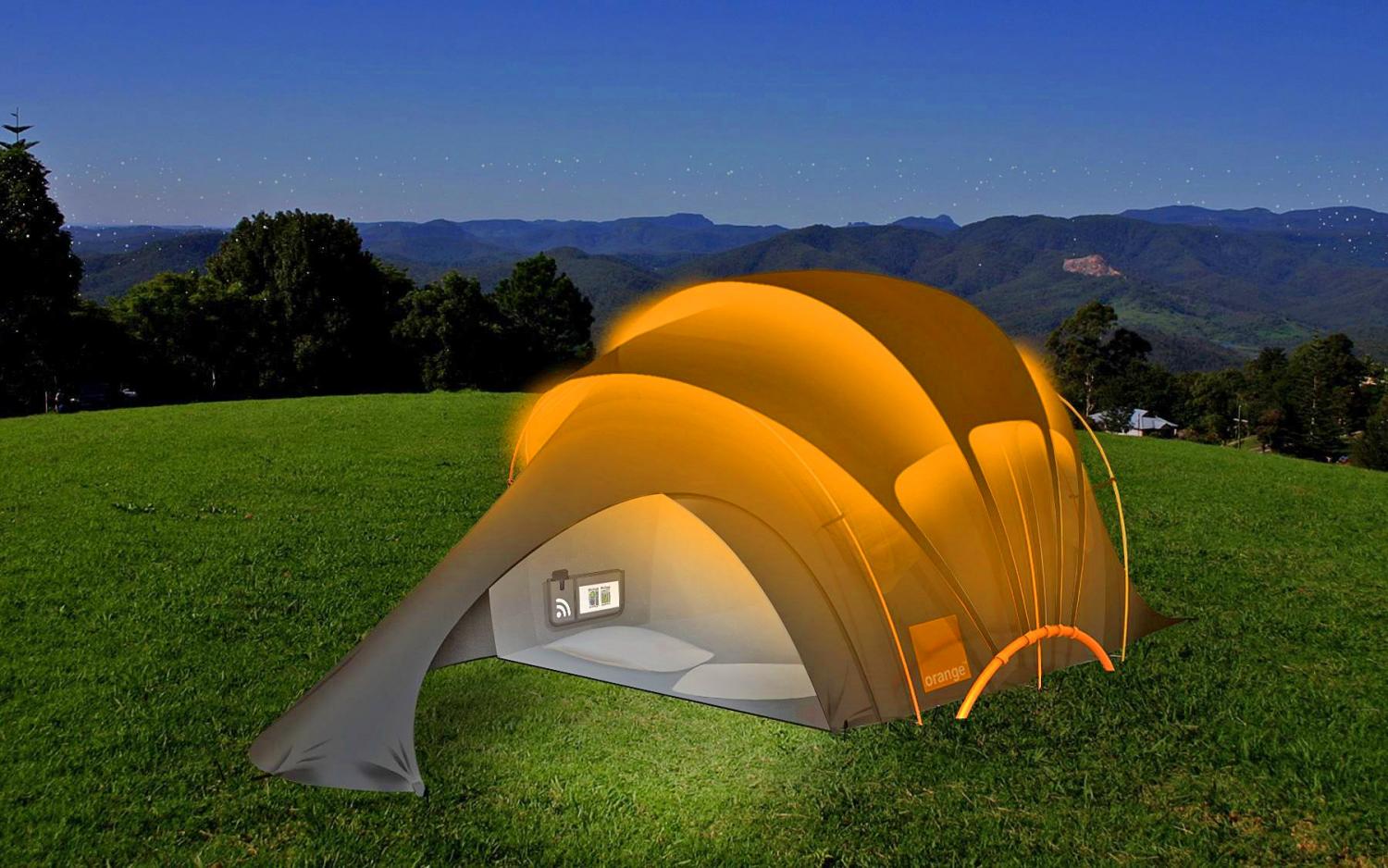 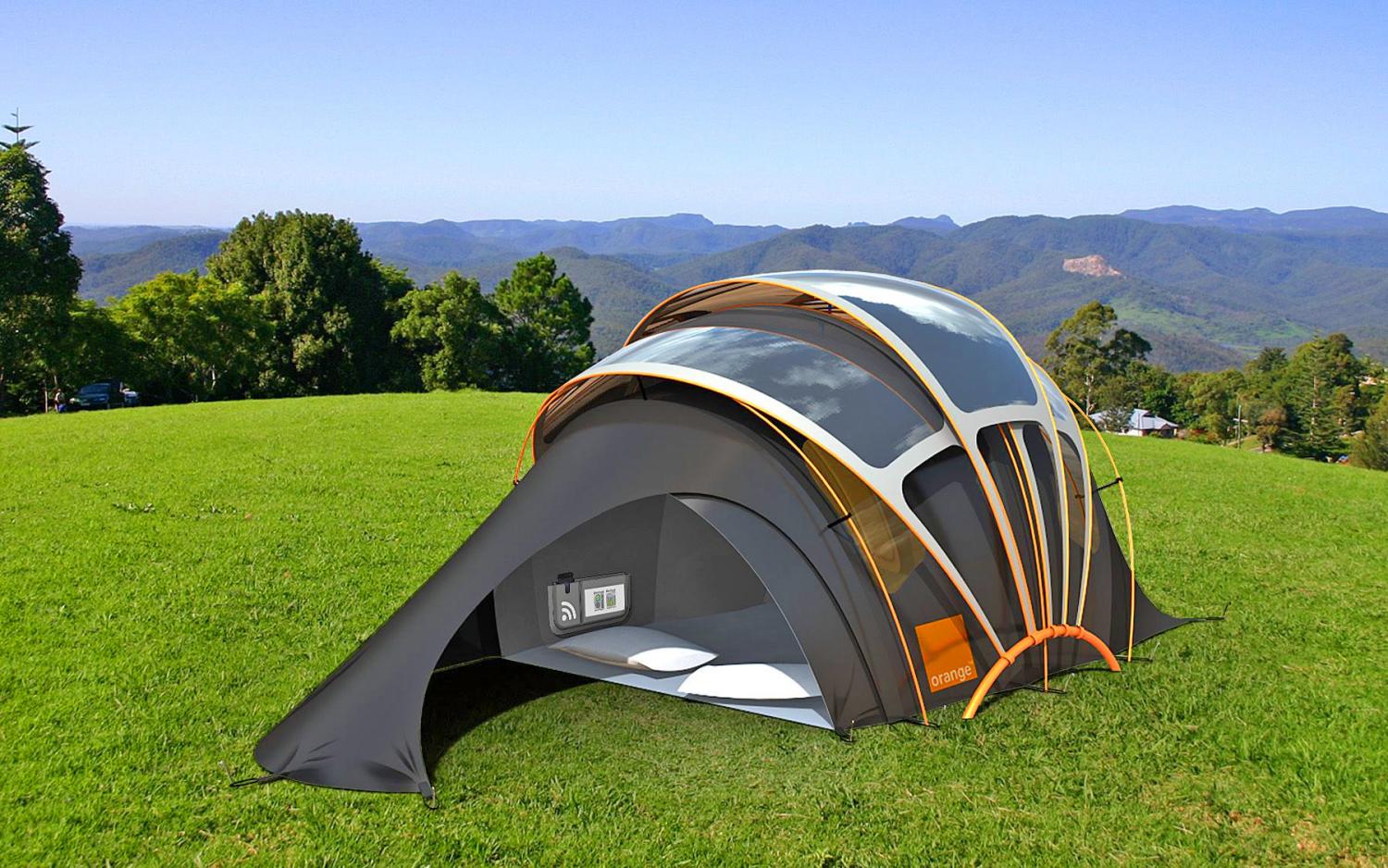 A wireless control hub that's located on the inside of the solar tent allows you to control everything from inside the coziness of the tent. The hub will display informational graphs and data on how much power you've generated through the solar panels, how much power you've consumed, the heated floors of the tent, control and settings for the integrated wi-fi signal, and more, all of which is controlled with a flexible touchscreen. 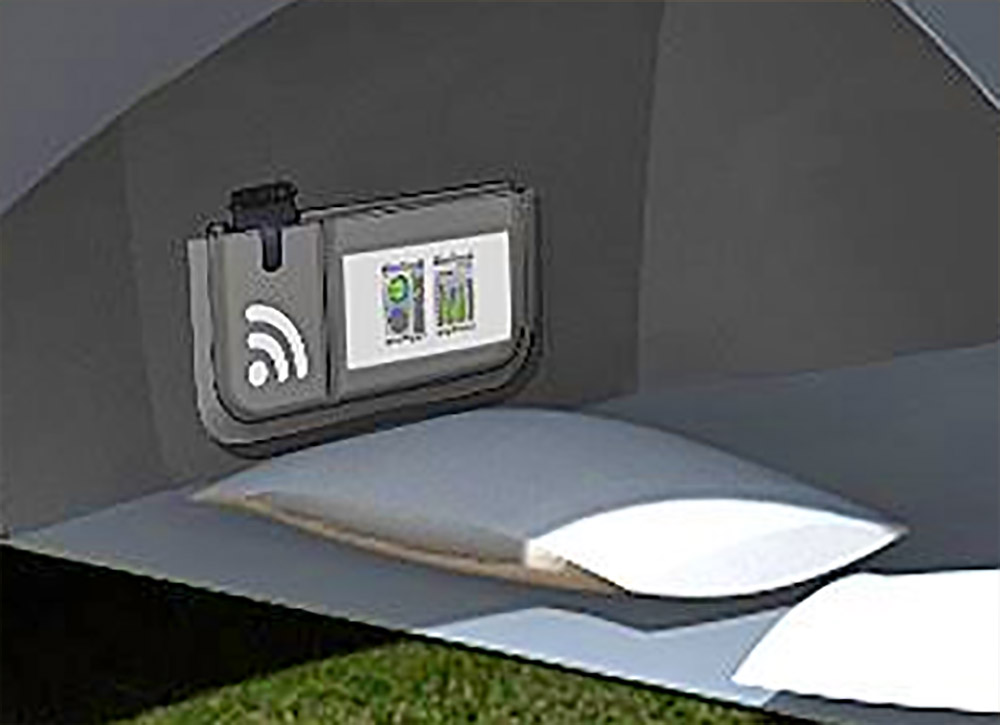 A wireless charging pad is also integrated into the control hub which allows you to wirelessly charge your phones, tablets, smart watches, and other devices that support it. This negates the need for messy cords as well as multiple chargers and adapters. It works by using a magnetic induction technology which passes an electric current through a coil that's embedded in the charging pouch. In-turn that coil generates a magnetic field which creates a charge and powers the battery in your device.

The groundsheet of the solar tent is embedded with a heating element which is controlled by the wireless control hub, that allows you to turn the heat one once the ground falls below a certain temperature level. This way you and whoever else is sleeping in the tent with you can stay nice and cozy all night long, no matter how chili it get outside. 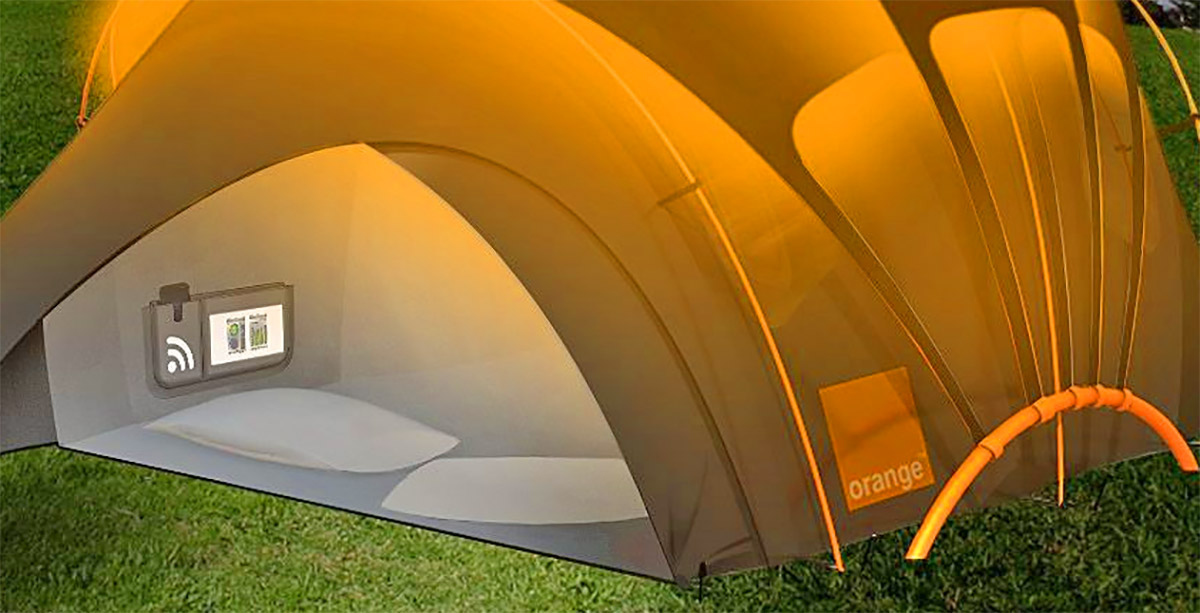 "Since becoming Official Communications Partner of Glastonbury Festival in 1997 Orange have strived to enhance the camping experience through a variety of sustainable initiatives. Our vision of the concept tent builds on this heritage and recognizes the revolutionary effect cutting edge solar technology and wireless communication could have on festival goers’ camping experiences." 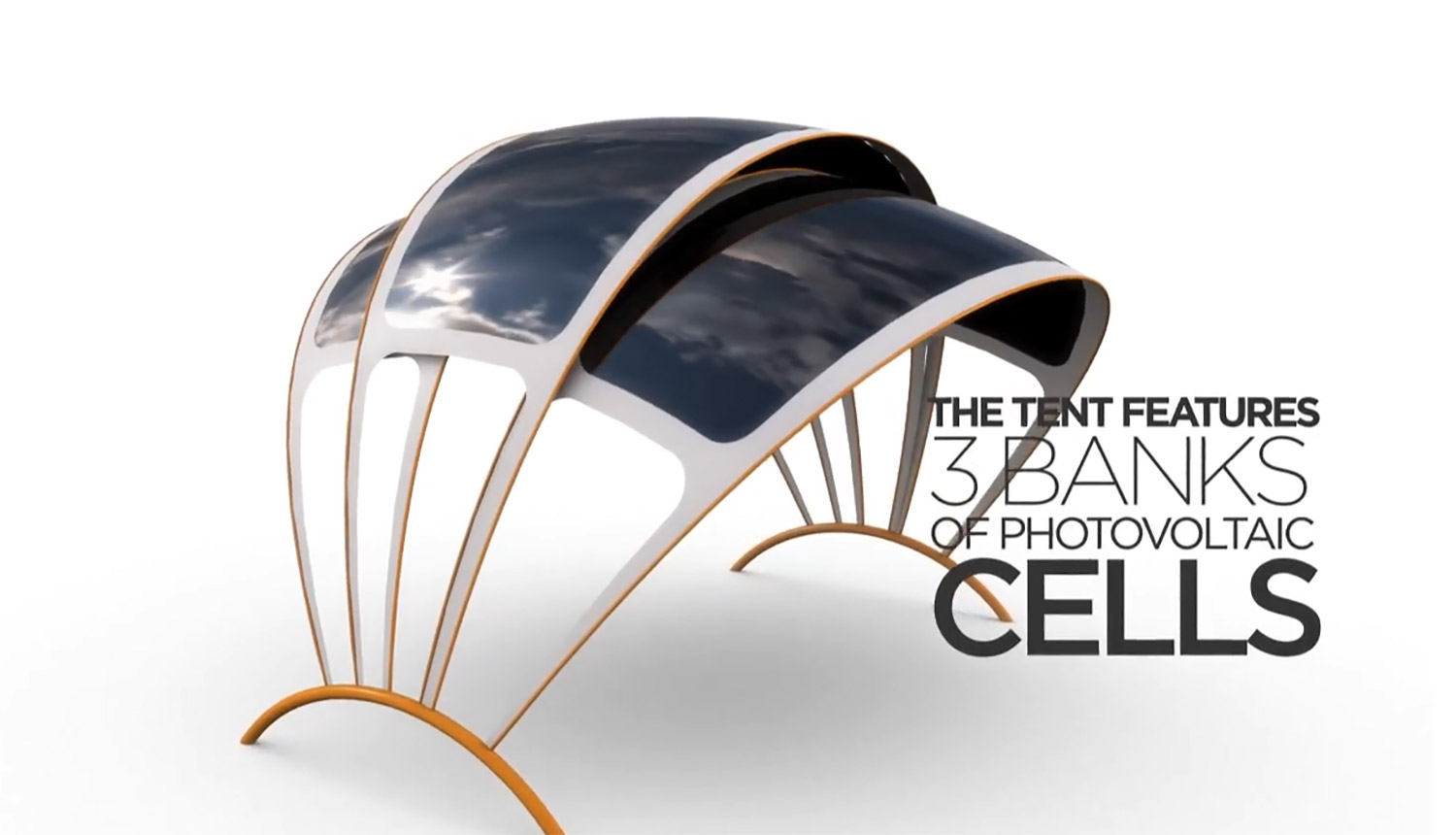 Although the solar tent is still just a concept for now, the unique tent concepts that are packed with incredible technology (aka Orange Chill ‘n’ Charge tent) were used at the Glastonbury festival to provide 600 mobile phone charging points, free internet access to everyone around them, as well as a great spot to relax and chill between shows. 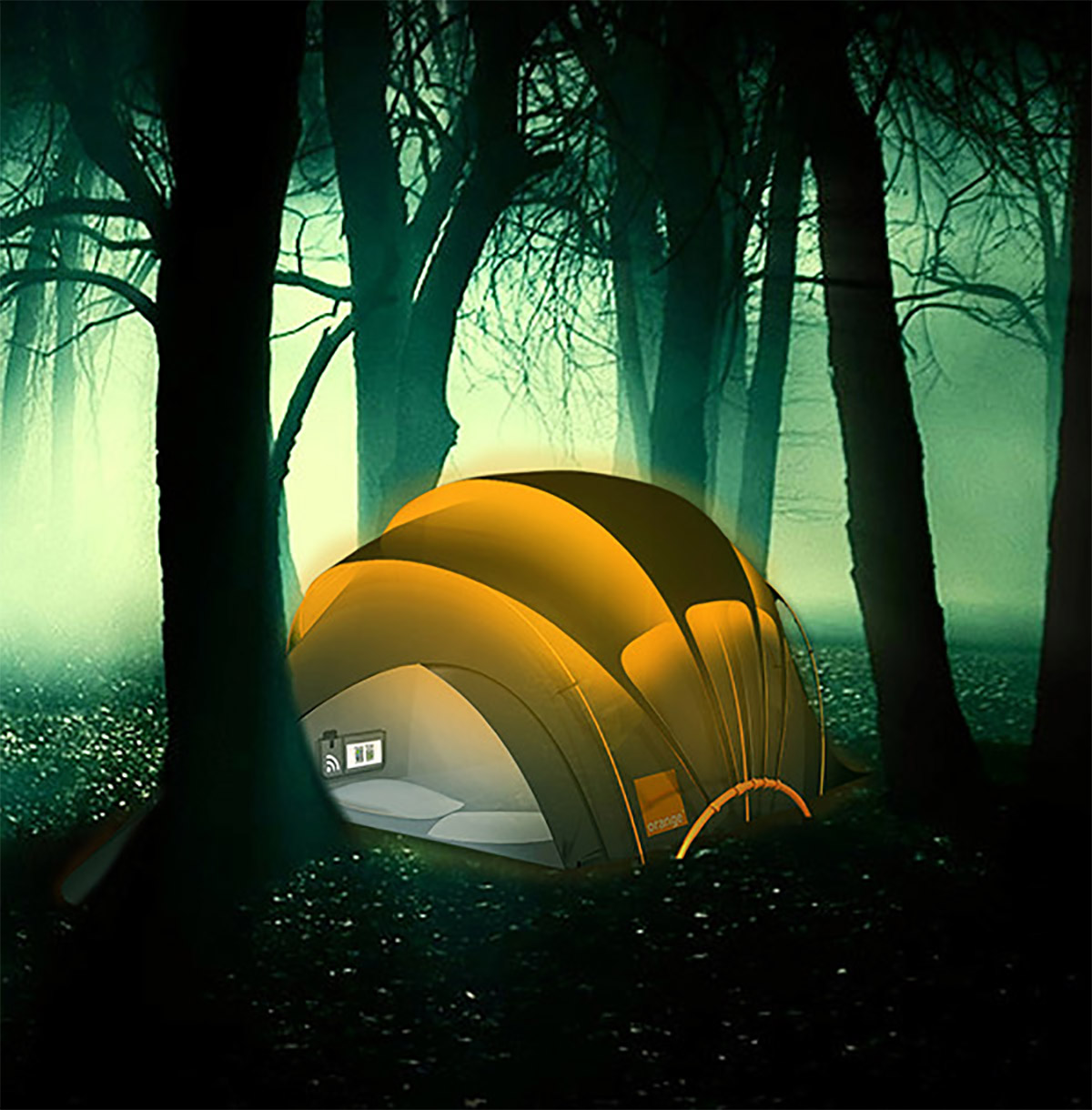 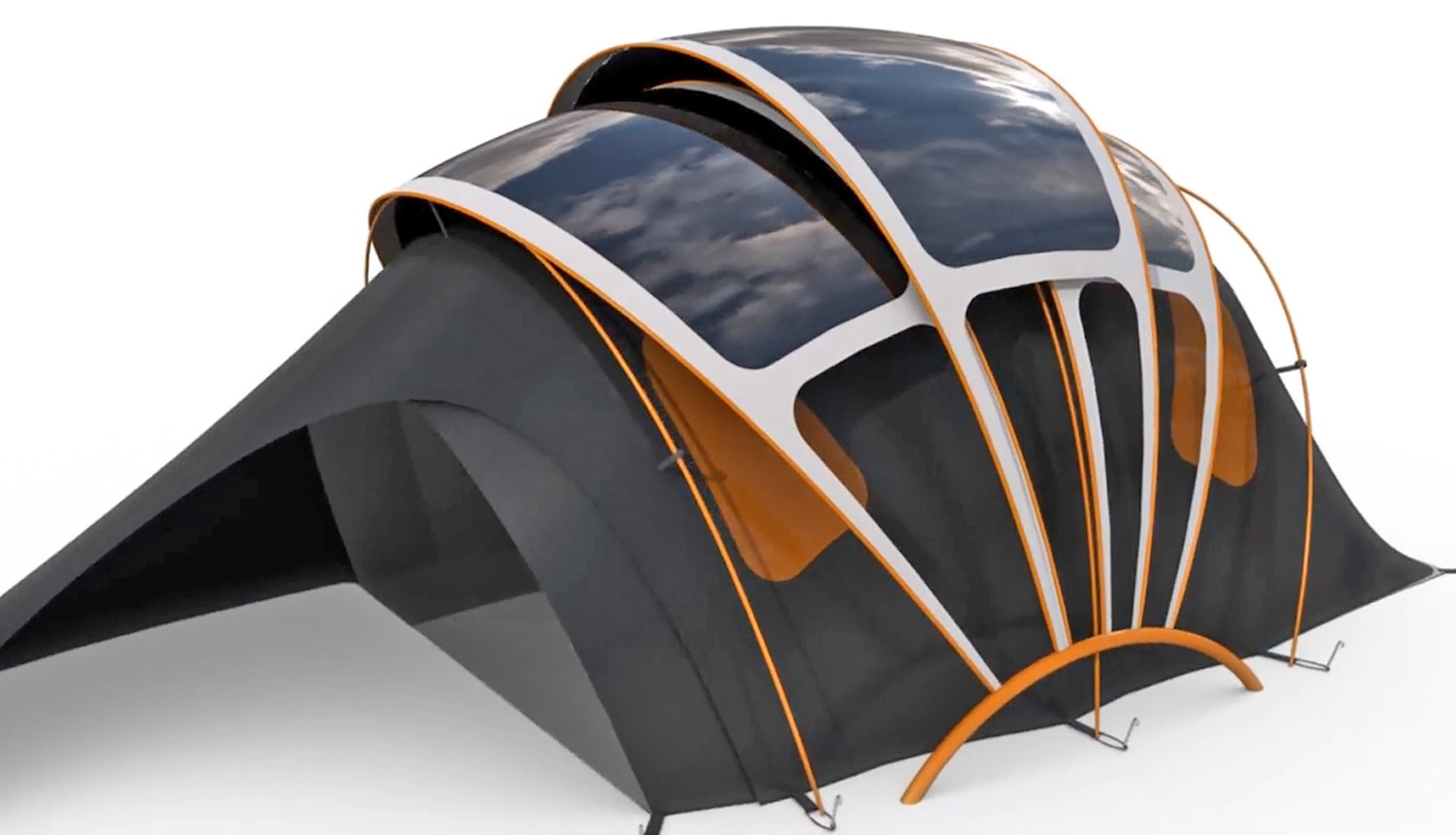 The solar cells not only power the technology in the tent, but also provide shade and keep the tent cool in the hot summer heat. 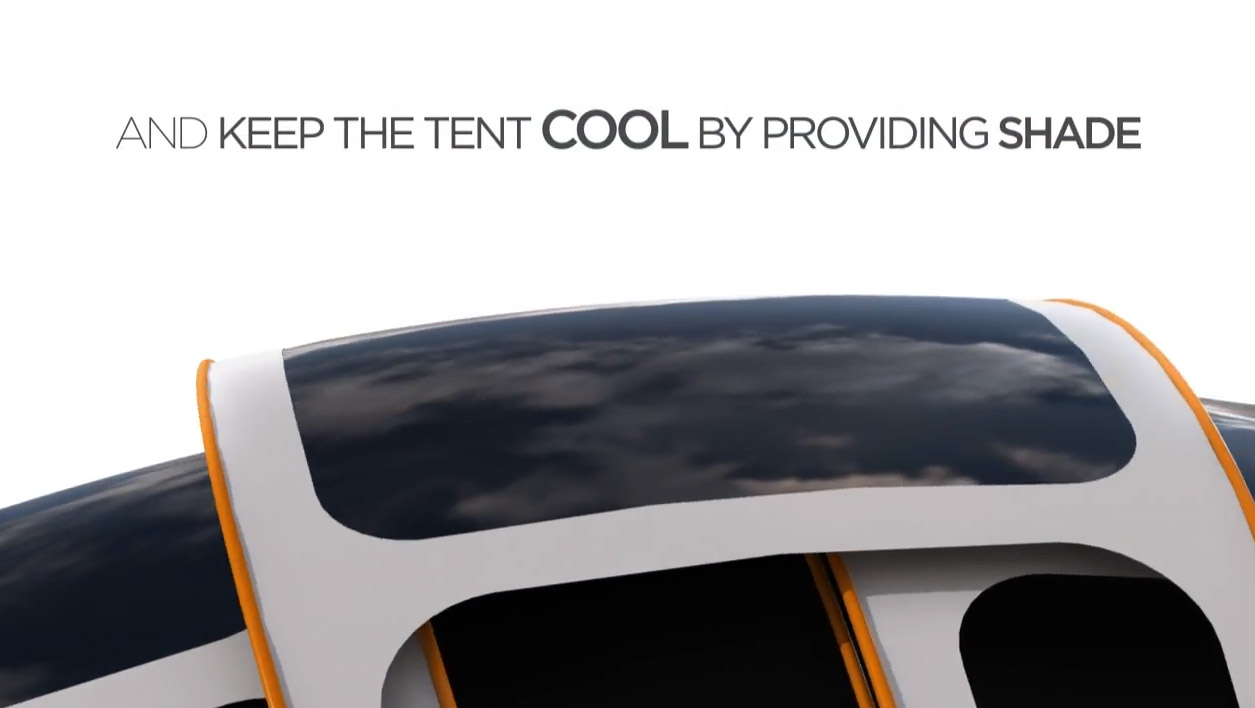 The solar tents are set up to be oriented East to West to allow maximum sun exposure. 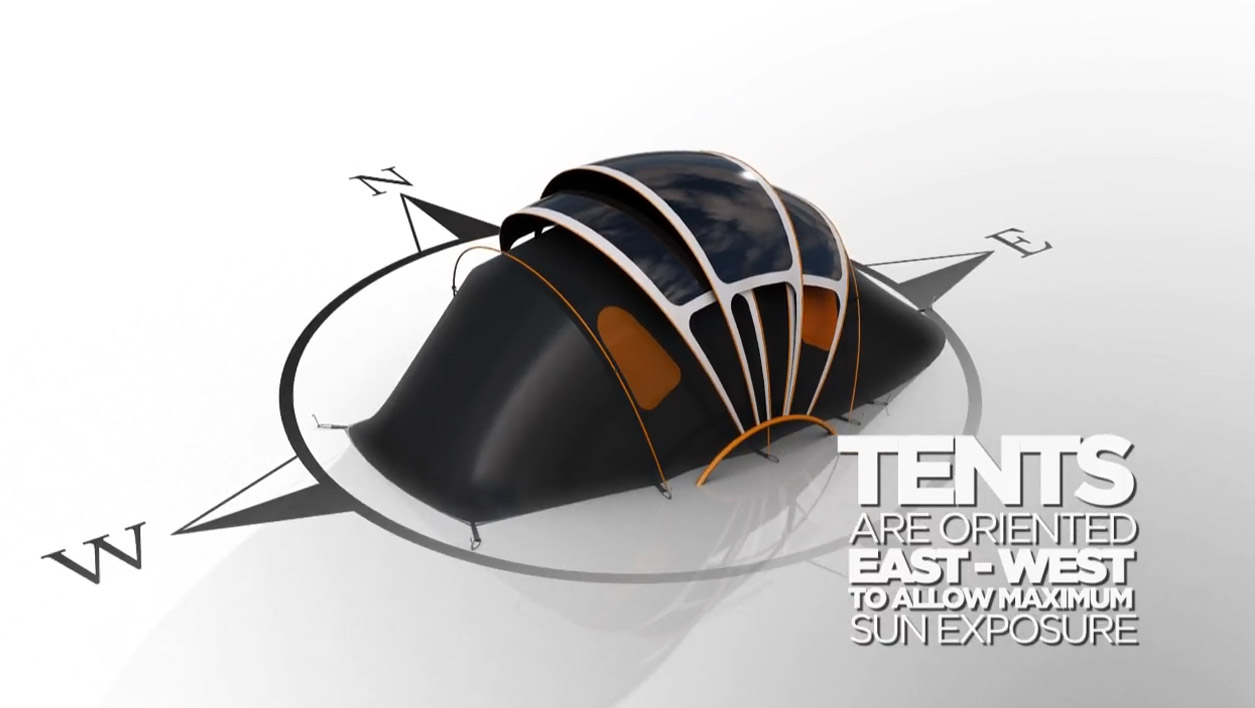 They also feature screened windows to provide proper ventilation throughout the tent. 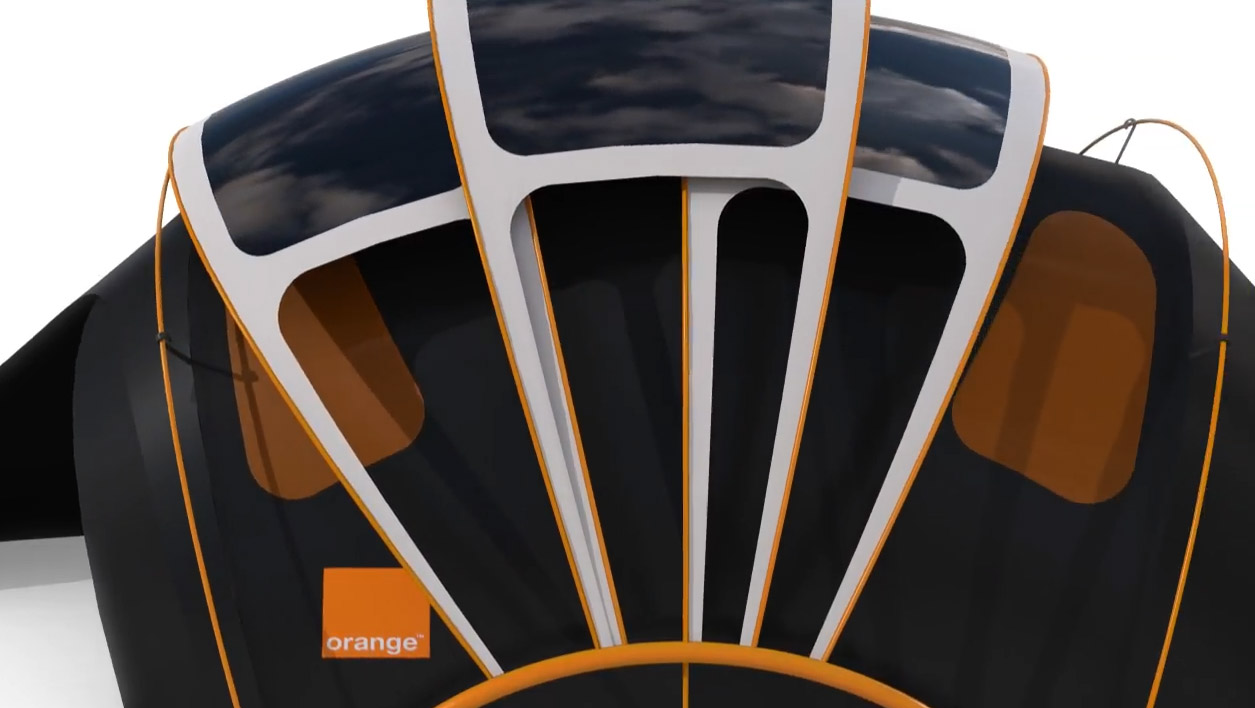 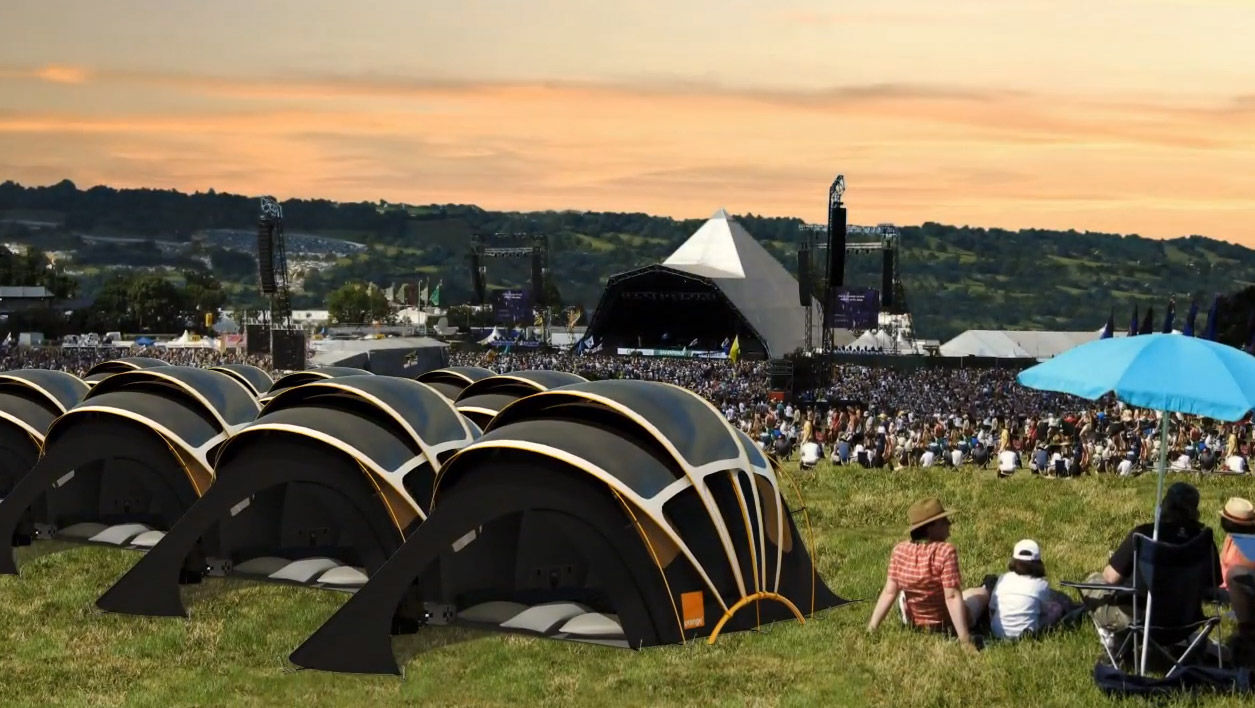 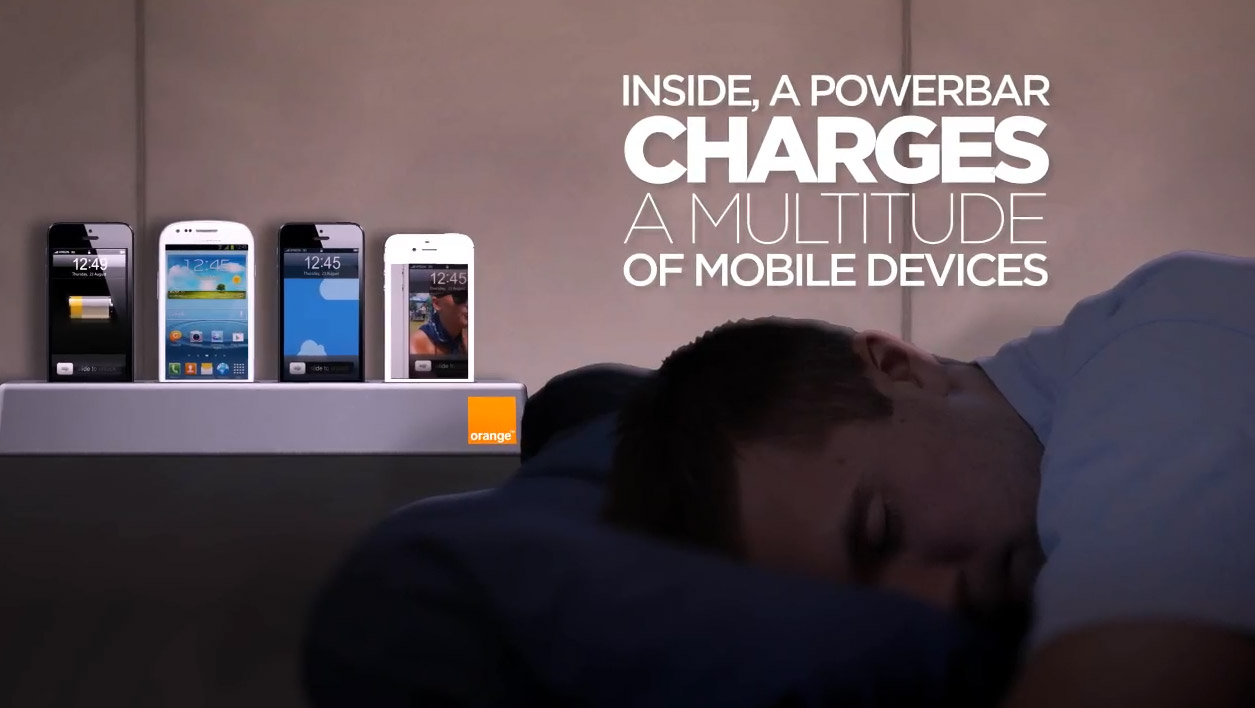 At night the tents come alive with radiant illumination! 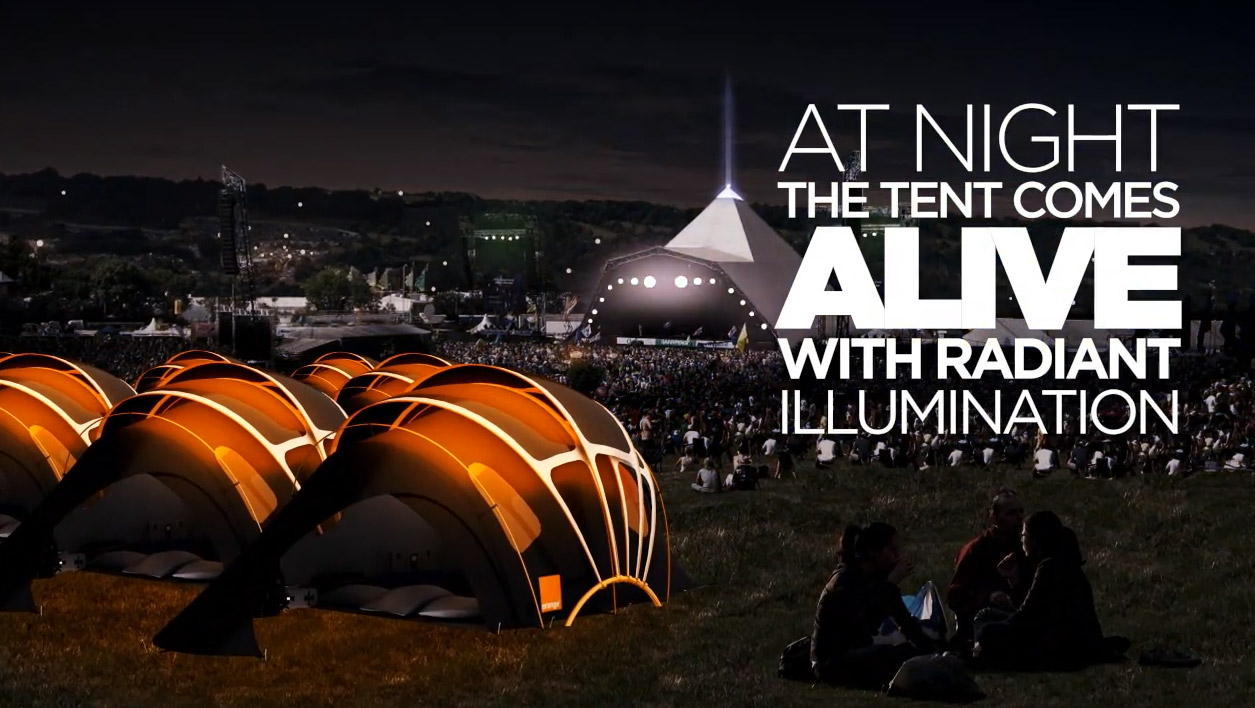 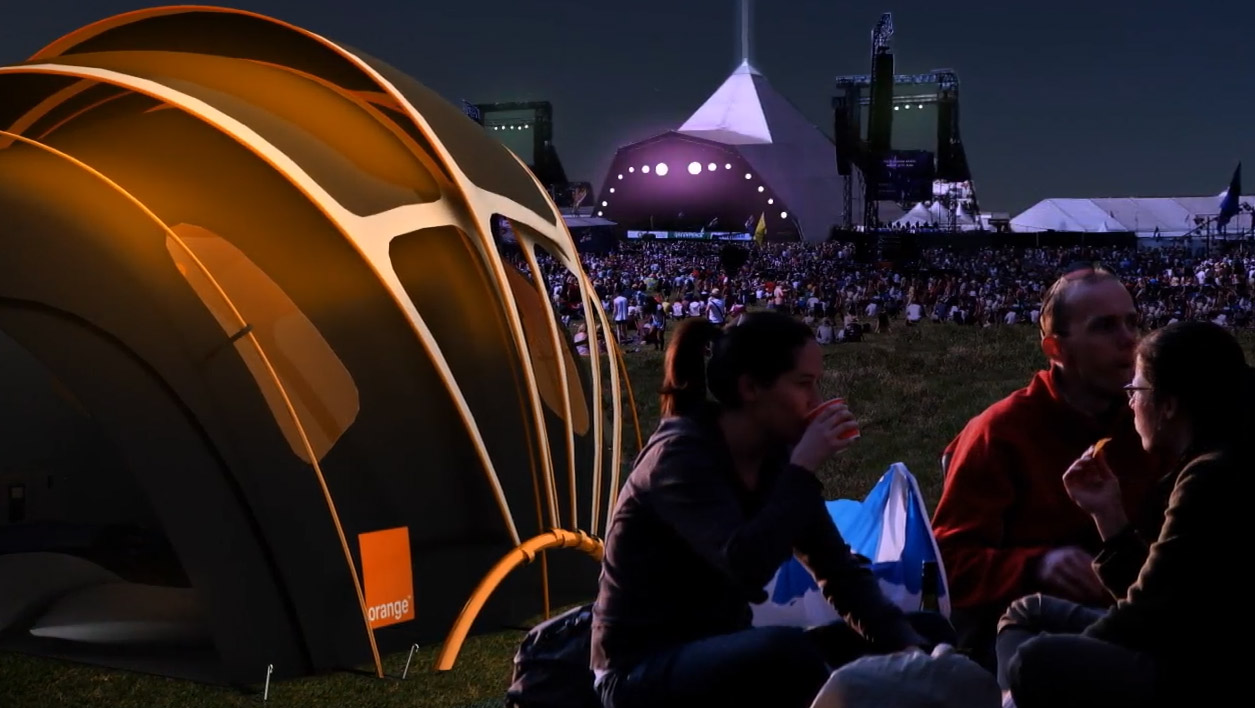 The surplus energy that's generated from the solar tents can be used to power vendor cards, lights, and even sound equipment and music festivals. 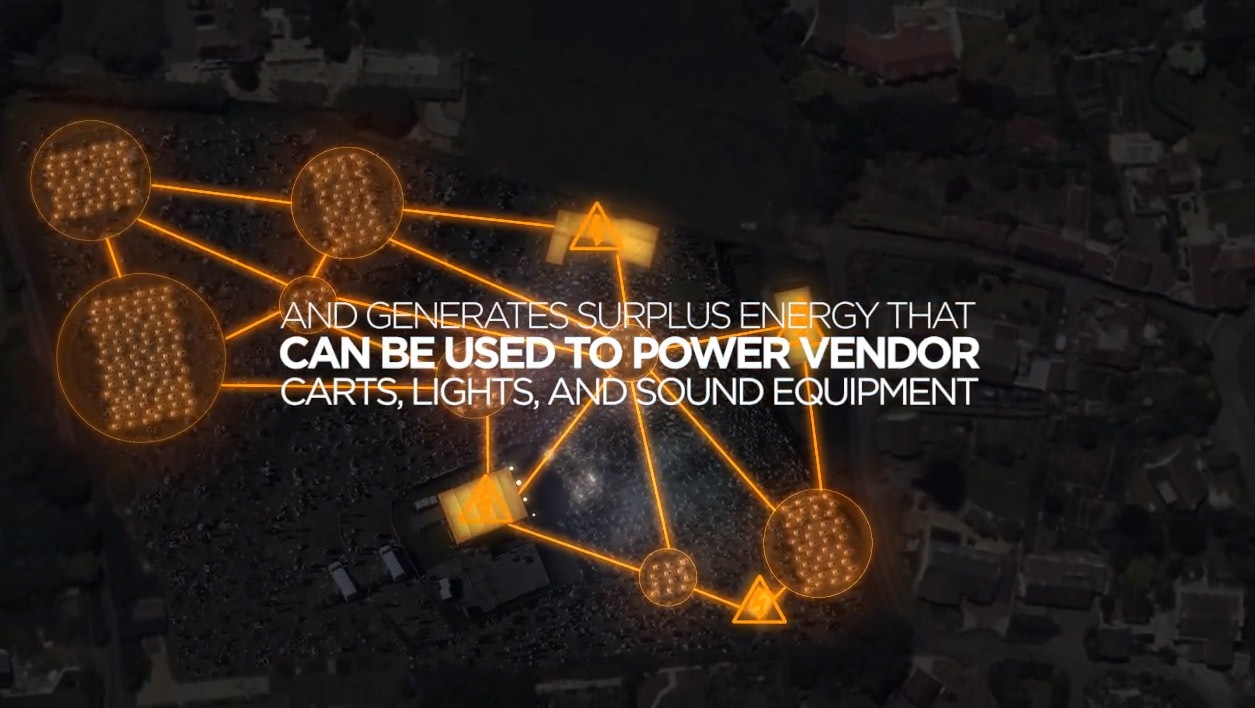 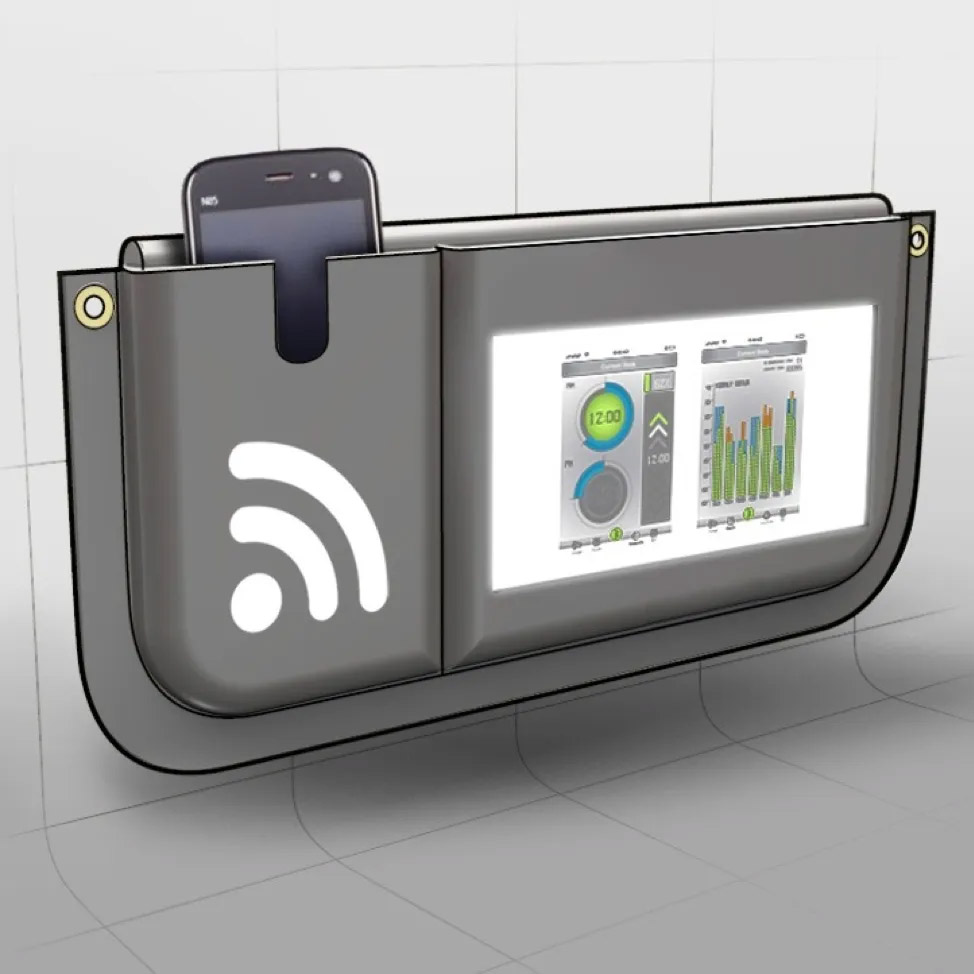 Check out the solar tents with heated floors, Wi-fi, and wireless charging capabilities in action via the video below.