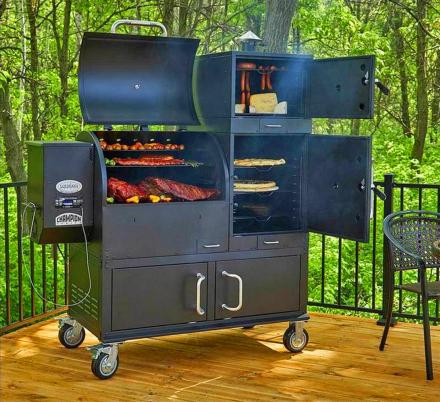 It's called the Louisiana Grills Champion Pellet Grill, and it features over 48,000 BTUs with 3 levels of cooking cabinets. On top is a warming oven, in the middle a smoke box and a standard grill area with 3 different grilling tiers. On the bottom is two large cabinets for storage. 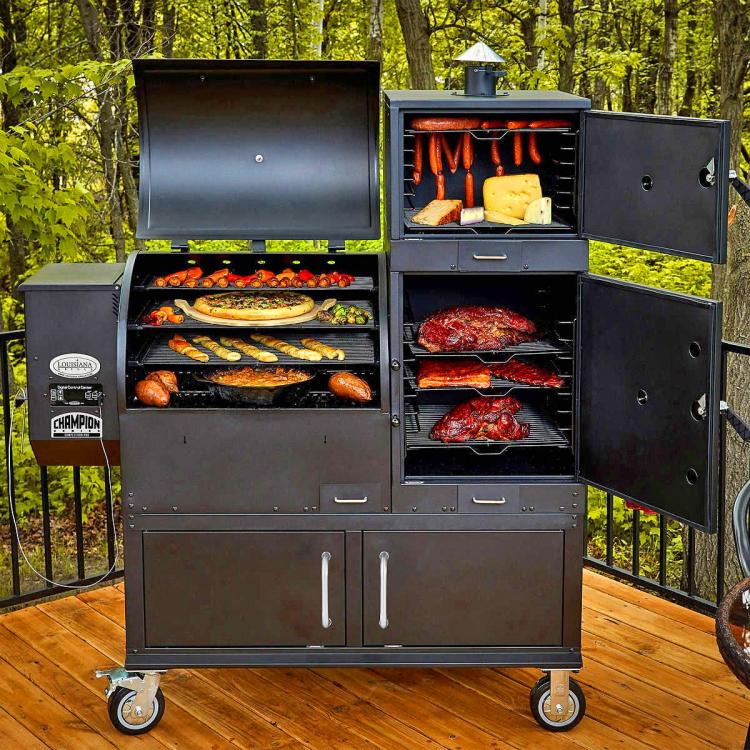 The giant BBQ pellet grill allows you to never worry about burning or overcooking your food by using an integrated masterful control of airflow throughout all the cooking chambers. A proprietary exhaust system allows you to evenly cook, grill, and smoke, in each chamber. A handle on the exhaust pipe on the top allows you to precisely control the air, and temperature gauges on the outside of each chamber give you all the information you need to perfectly cook the ultimate meal.

On the main level of the giant grill is a fan-forced convection airflow, which allows the grill to work like a convection oven. There's also a flame-broiler on the grill that will allow you to sear a steak using a direct flame when needed.

The Ultimate Grill has a dynamic temperature range of 60°F-600°F (15°C -177°C), it weighs 402 lbs, and will require assembly upon delivery. Once fully assembled, the giant grill measures 6.23 feet tall x 5.9 feet wide x 2.5 feet deep. You can move the giant BBQ grill around using the four 6 inch caster wheels on the bottom. Plus it even features a bottle opener integrated into the side of the counter top.

Check out The Ultimate Grill by Louisiana Grills in action via the video below.

An incredible exhaust and air-flow system gives you complete control.

A warming oven lets you keep you're already cooked items toasty, or you can put it buns, cheeses, and more.

A massive amount of cooking tiers between the two smoker chambers.

Pour in your pellets into the massive 27 lbs capacity hopper.

A unique digital control center on the front of the hopper lets you control everything from temperatures to meat probes.

There's two empty cabinets on the bottom of the grill for storing all your cooking essentials and accessories.

4 heavy-duty casters with locks allow you to move it around easily on patios, decks, and more.

What Ultimate Grill would be complete without an integrated bottle opener?

The giant grill is made from a heavy-duty 14-gauge steel construction.