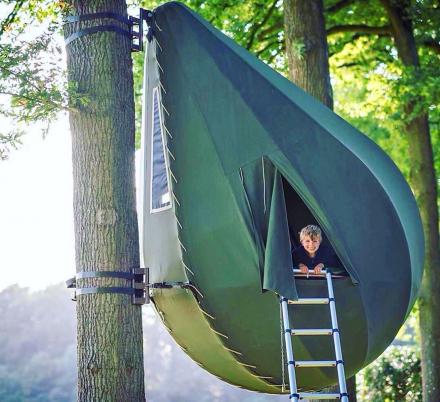 There are two types of people in this world, those that would love to sleep and camp up in the trees, and those that would never want to camp up in the trees! This unique product is a little more tailored to the former group. This incredible tree tent allows you to sleep up on a tree and sway in the wind while  you camp high up in the air and off the ground! It's called the TreeTent, and it's shaped like a raindrop. The unique tree tent was designed and created by Dutch sculptor, designer, and canvas-architect, Dré Wapenaar.

Though you can't actually buy the dew drop shaped tree tent anywhere, they are available for rent 5 months of the year at the Hertshoorn campground in the Netherlands. They were designed by Wapenaar back in 1998, and were inspired by the Road Alert Group in England, which were activists that chained themselves to trees which were due to be cut down in the hope of saving them. 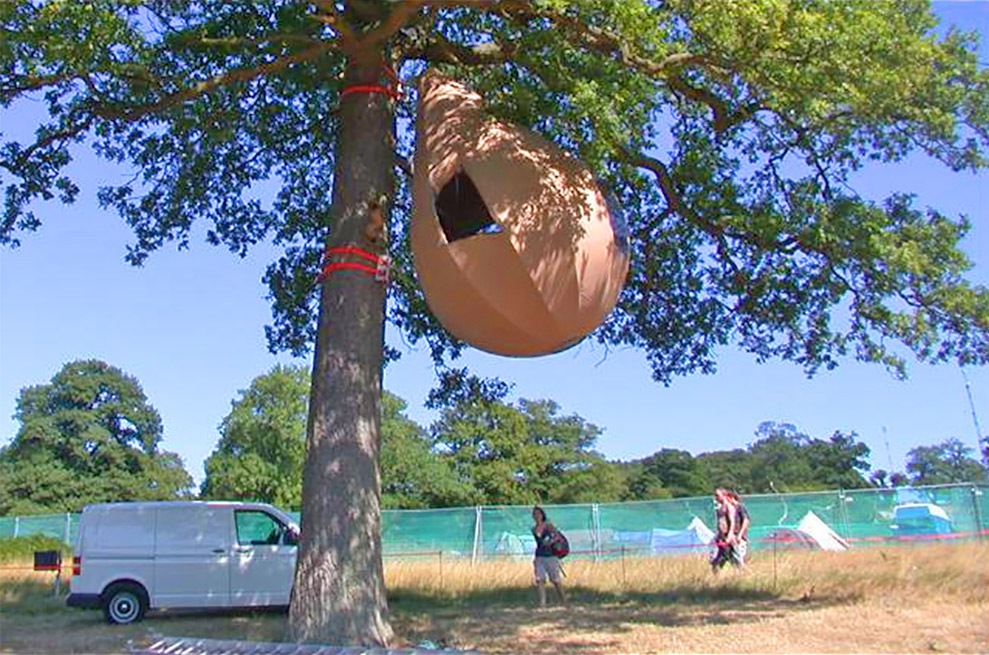 "My inspiration for the shape was not the dewdrop. Form followed function." 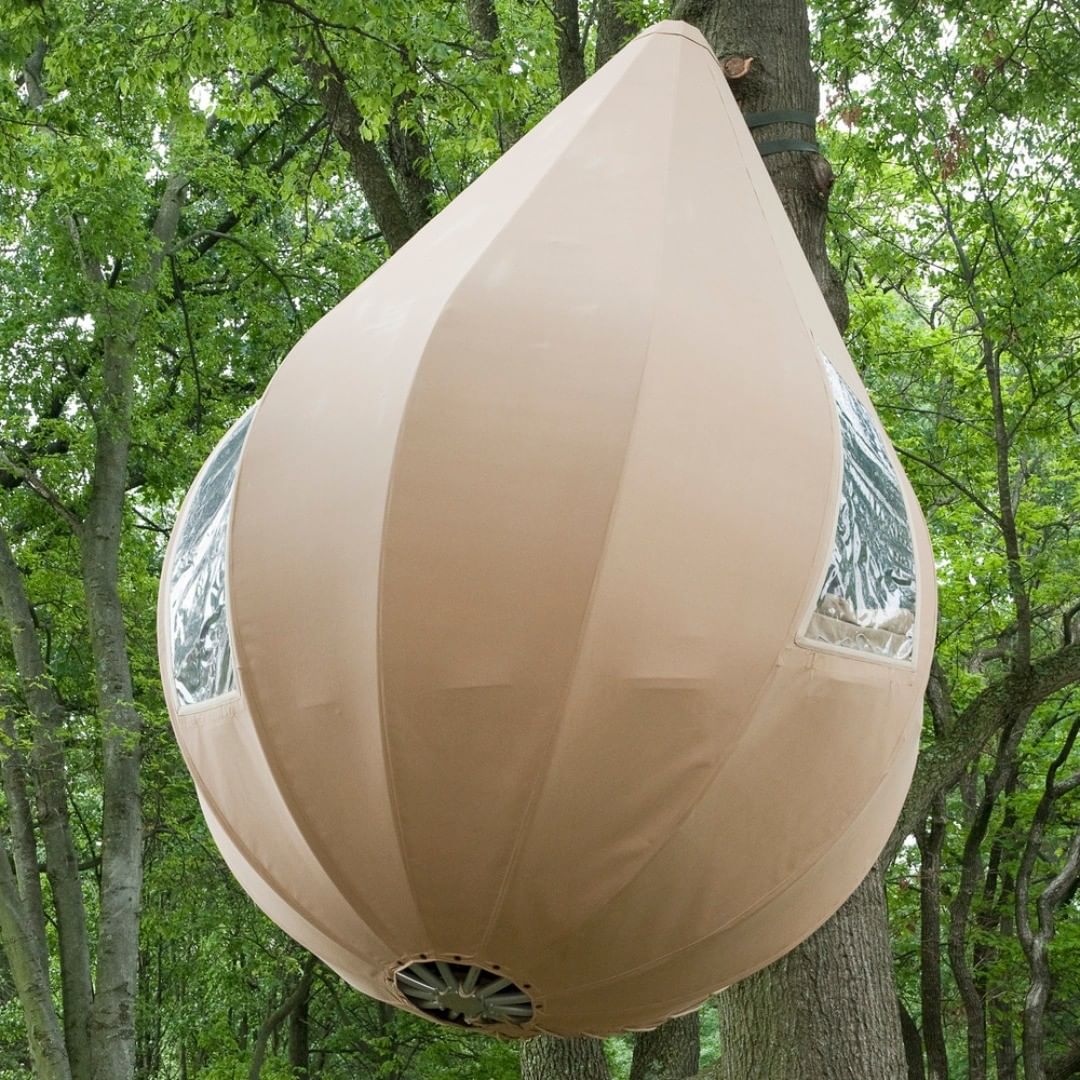 Similar to the transparent bubble tent, the tree tent lets you camp closer to nature than ever before as you essentially become one with the tree! You can attach the treetent however high up on the tree you'd like, but the higher up you install it, the more you'll be swaying around with the trees in the wind. So depending on how much swaying you'd like to be doing at night, you may want to install it lower to the ground. 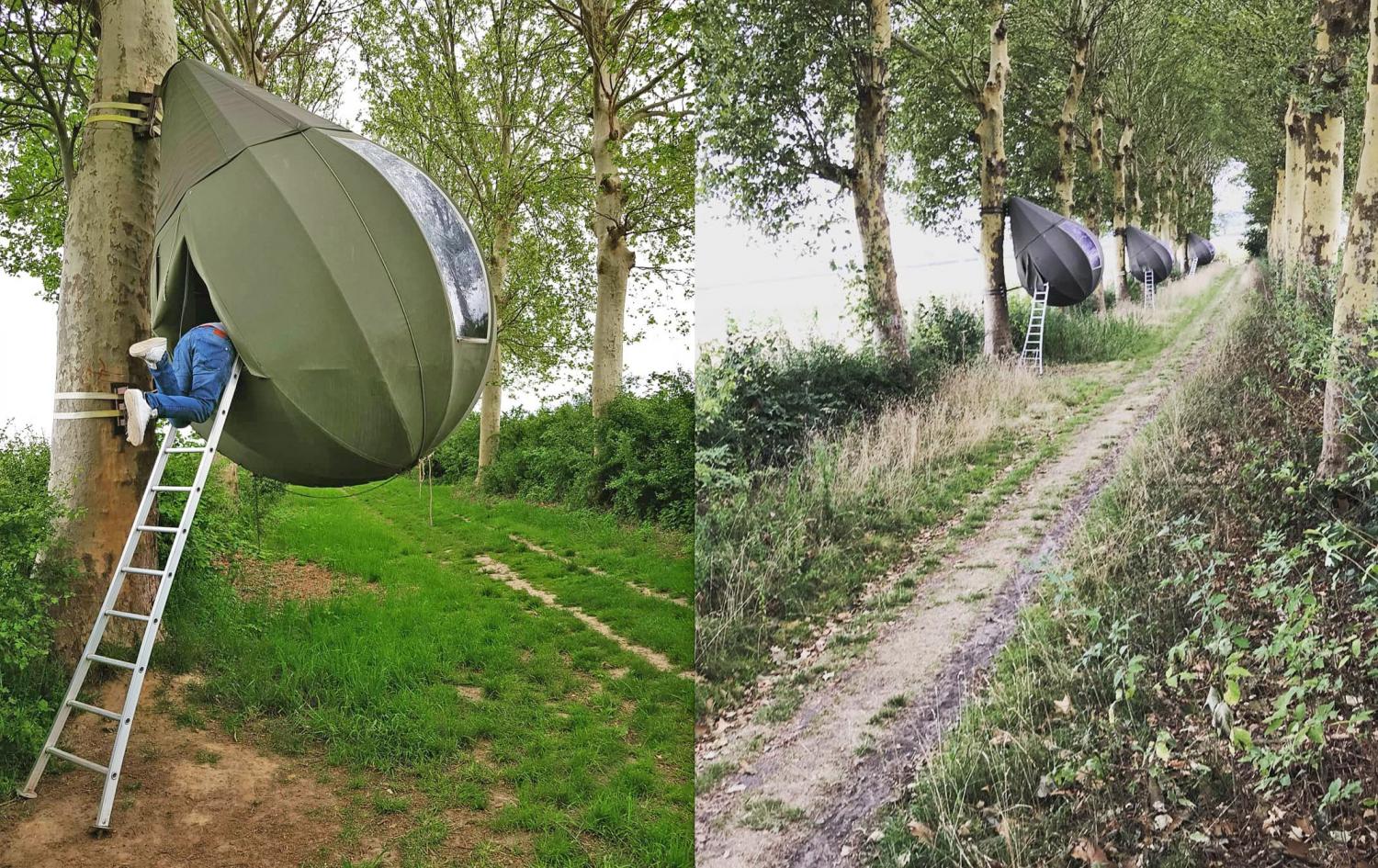 You'll need a ladder to get in and out of the tent, and you're going to want to make sure nothing happens to that ladder, or you may get stuck out there! The unique dew drop tree tents can sleep two adults along with two children on the main floor, which is about 9 feet in diameter. A small second level is also there for kids to peek out the window!

An inside view of the dew drop tree tent

"Even though I designed the tents for use by the ROAD ALERT GROUP the project never happened. Before I finished it, a representative from a campsite saw the drawings of the TREETENTS and convinced me to sell them this project. It was a huge success; and is still in use today."

"He designed a tent in the form of a water drop, to be suspended high above the ground between two giant trees. There, individuals could comfortably hold out against the superior forces ranged against them for some time. What a fine picture it would make: tents hanging among the leaves and branches like green tears, a sign of mourning."

"The idea was for demonstrators to nestle close to the treetop, swaying in the wind, out of reach for the arm of the law. The hanging tents still embody this desire to escape gravity. As holiday accommodation they are certainly an alternative to flat-dwellers and long traffic queues." 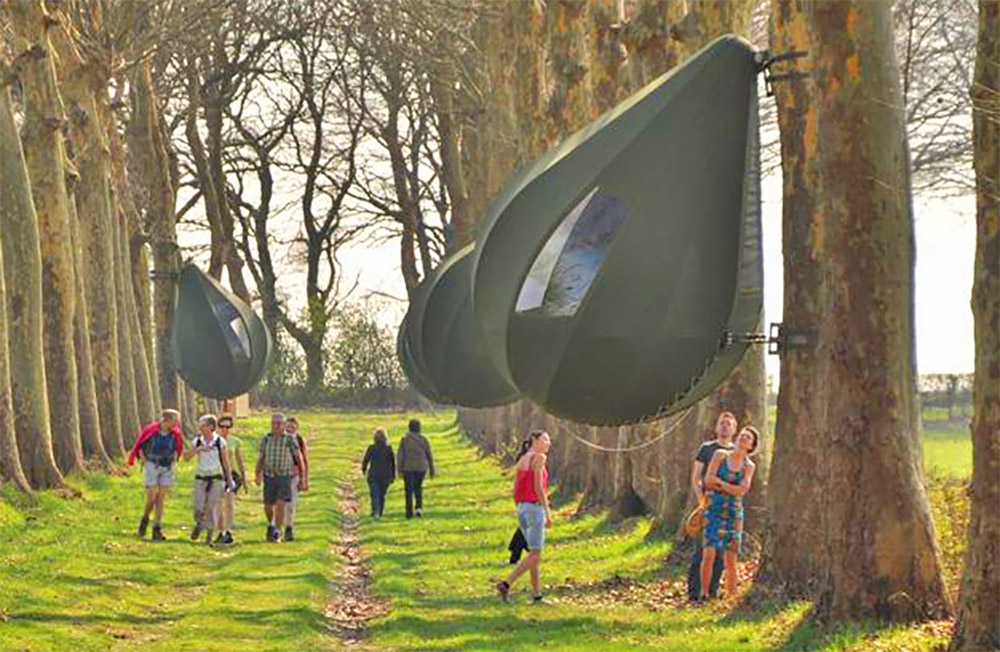 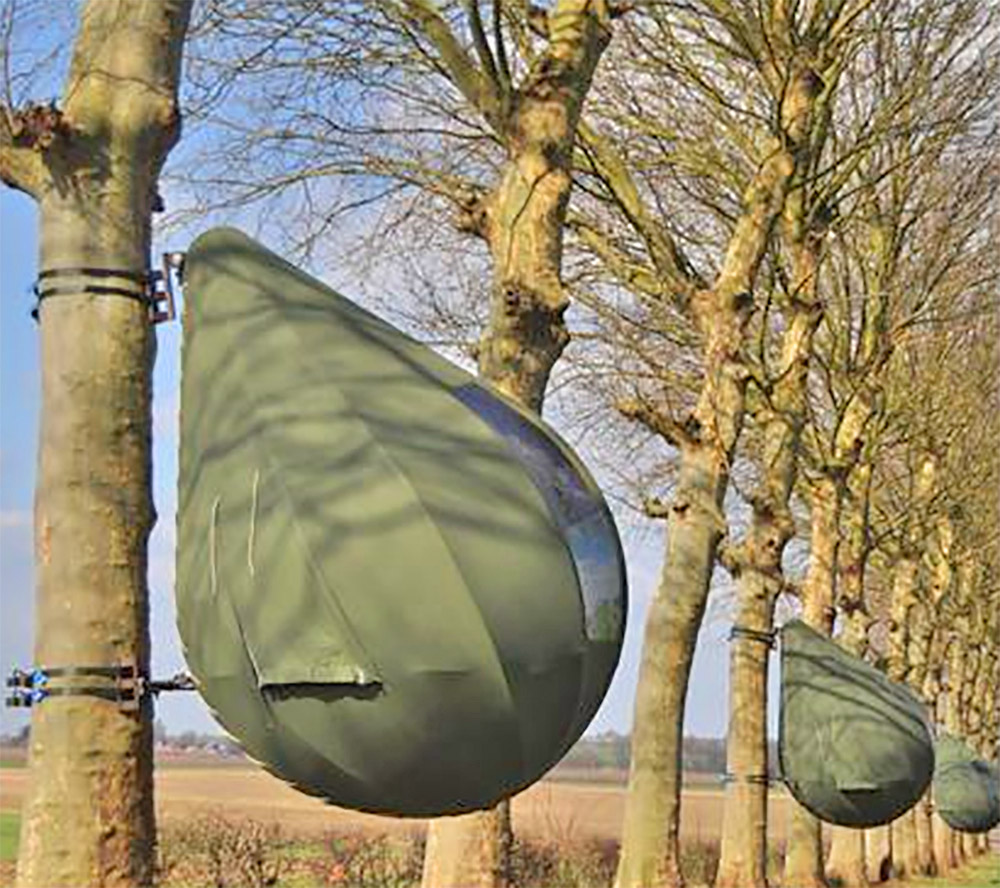 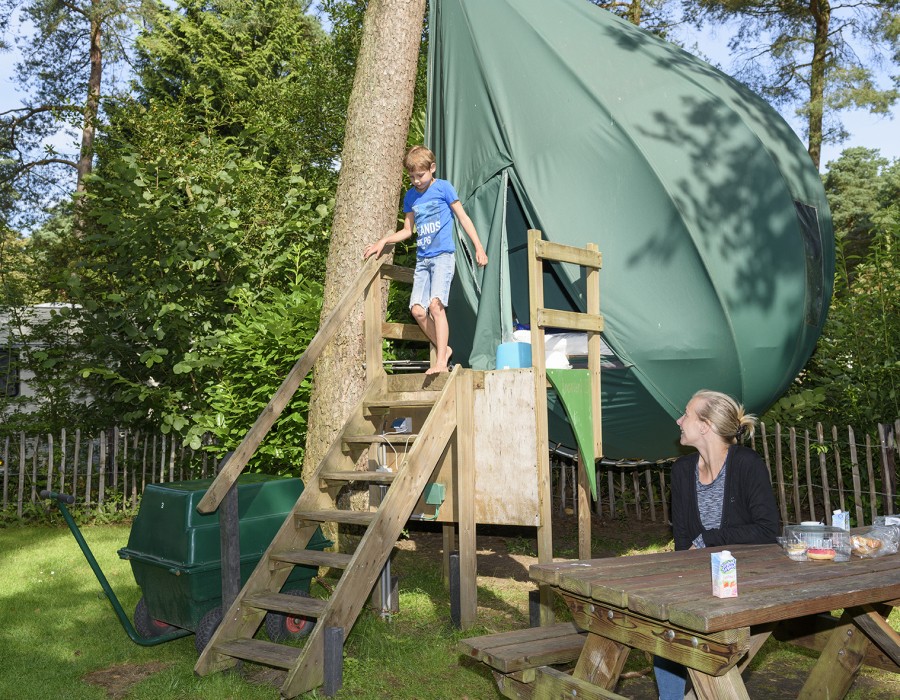 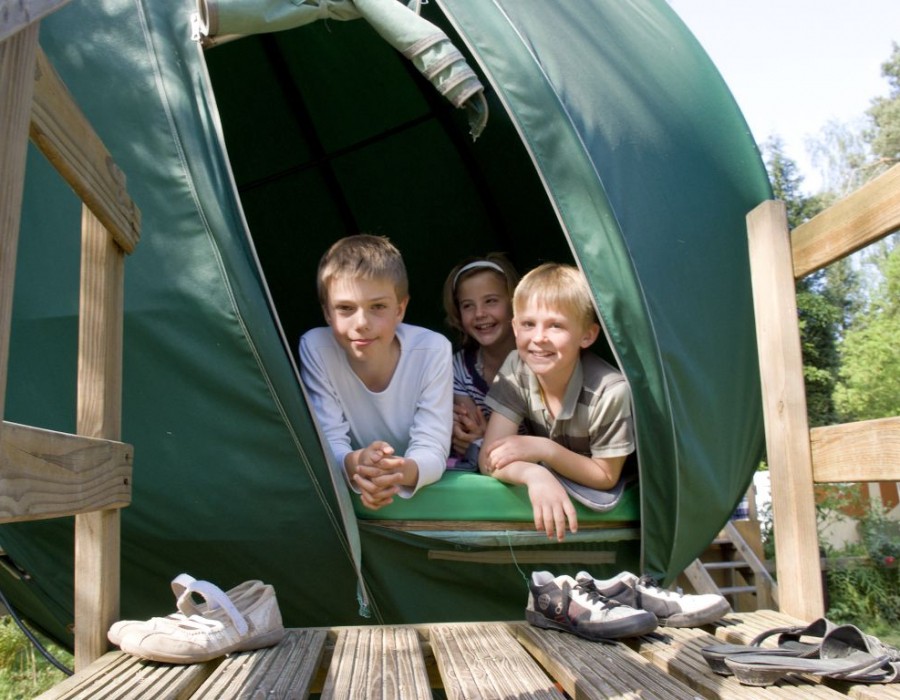 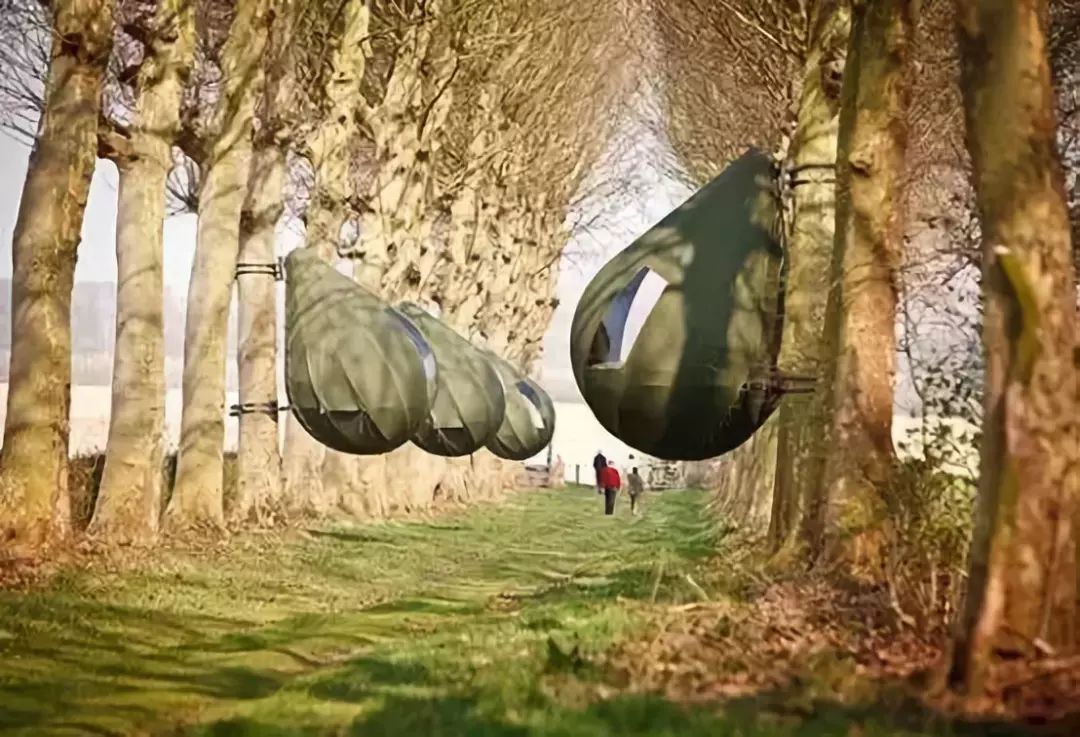 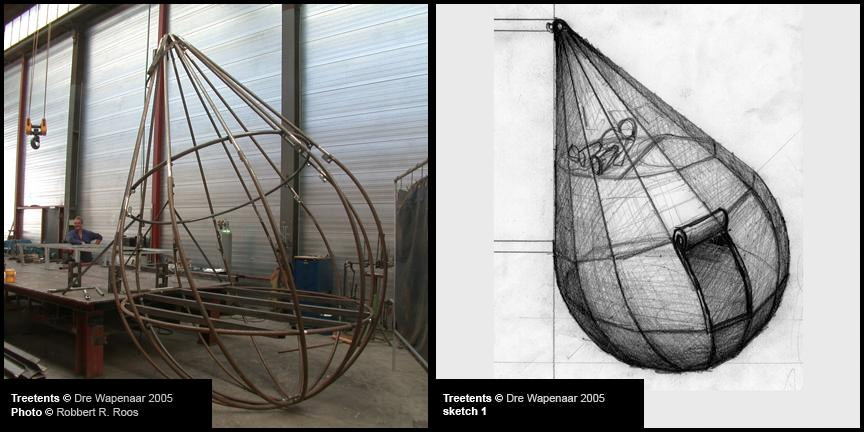 Original plans for the second version of the dew drop tree tent back in 2005. 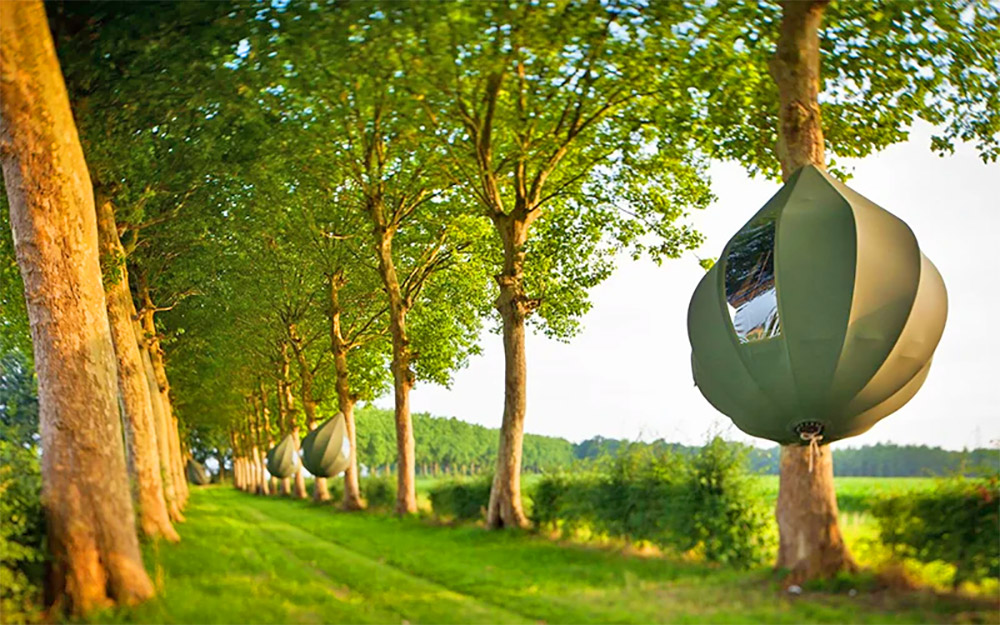