Check It Out
@Amazon
Find on Etsy 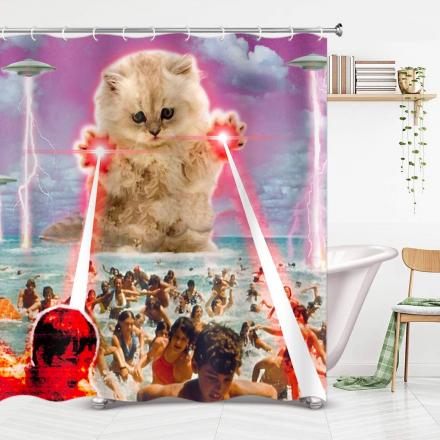 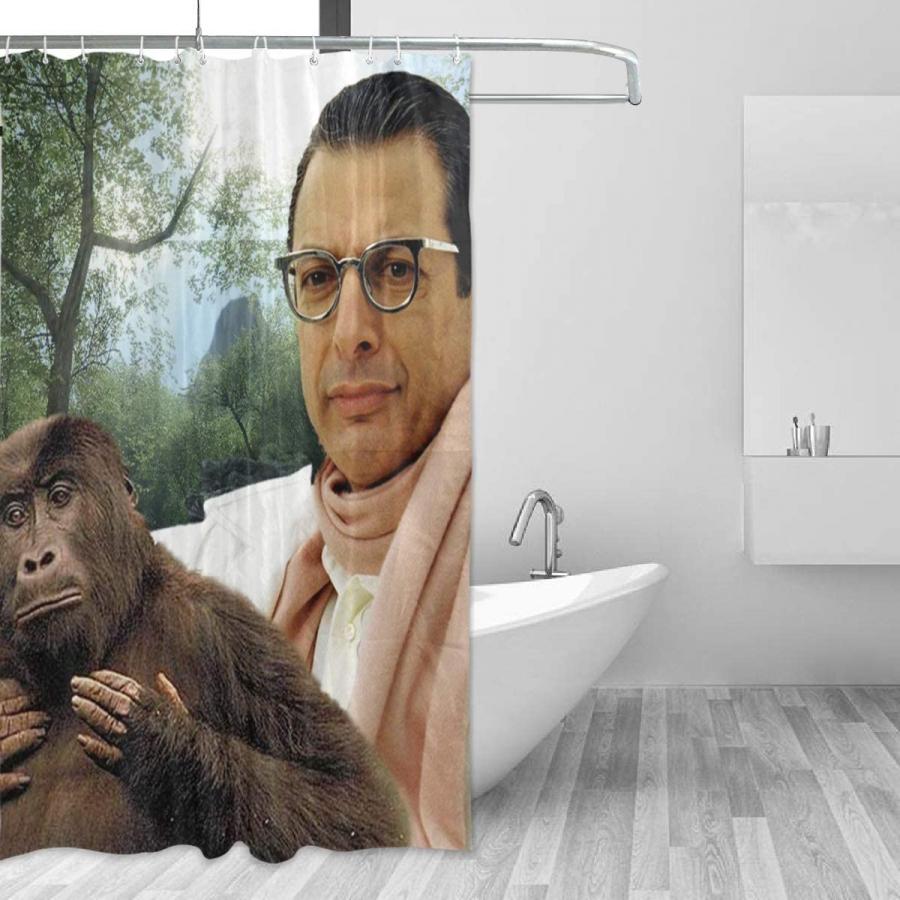 What a world we live in, where we can a shower curtain featuring Jeff Goldblum and a monkey. What does it mean? We haven't a clue. But there's nowhere we'd rather have this odd image than on our shower curtain. Get it here 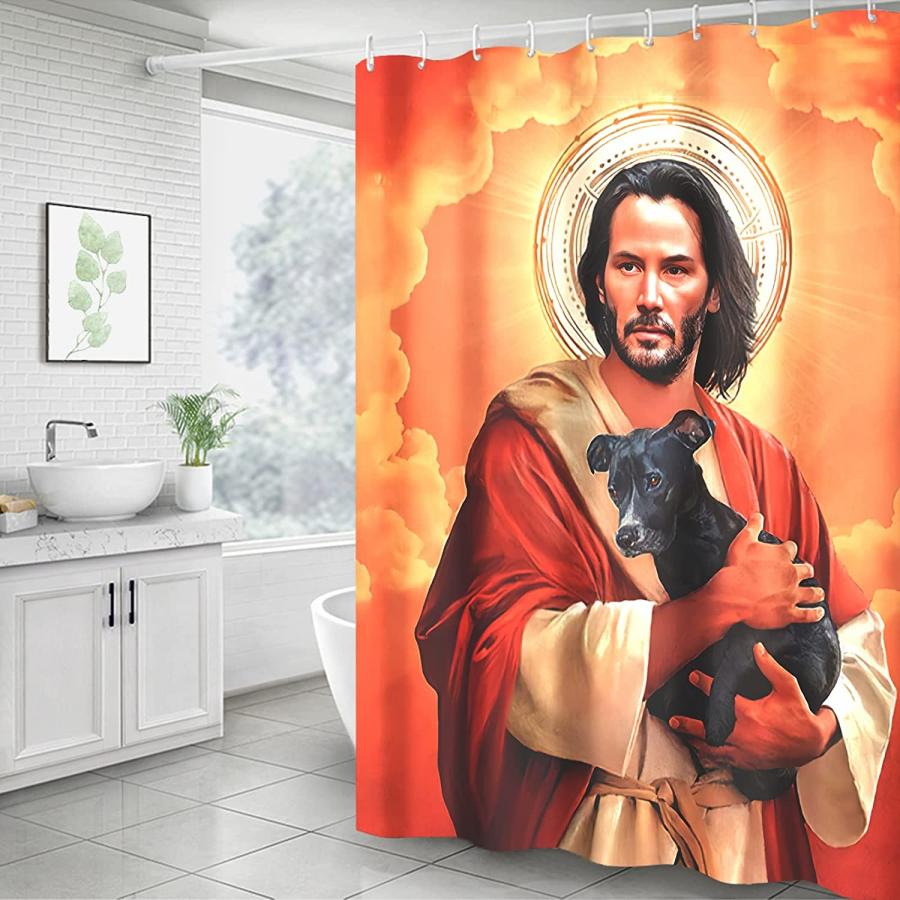 We all know that Keanu Reeves is holier than though. So what better image to have on your shower curtain than Keanu Reeves dressed as a biblical God while holding a cute little doggy. Get it here 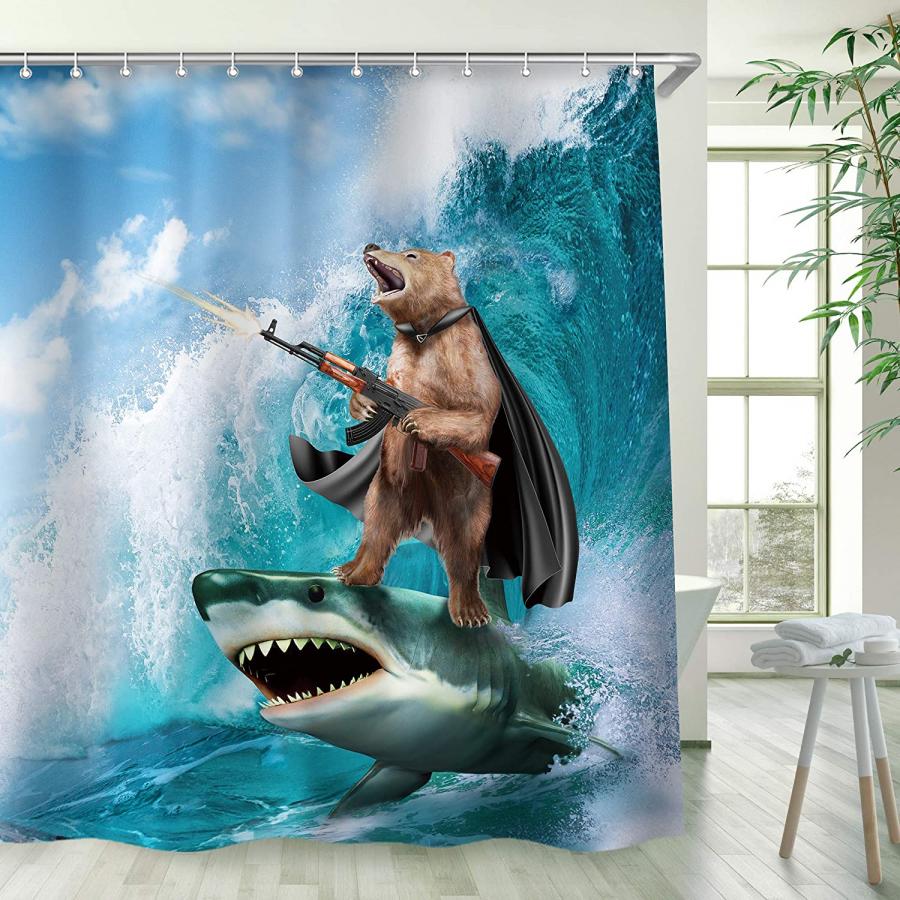 If you're looking to make a statement as soon as someone walks into your bathroom, look no further than this one featuring a bear in a cape riding a shark while shooting a machine gun. Get it here

A giant cat shooting lasers out of his hands shower curtain 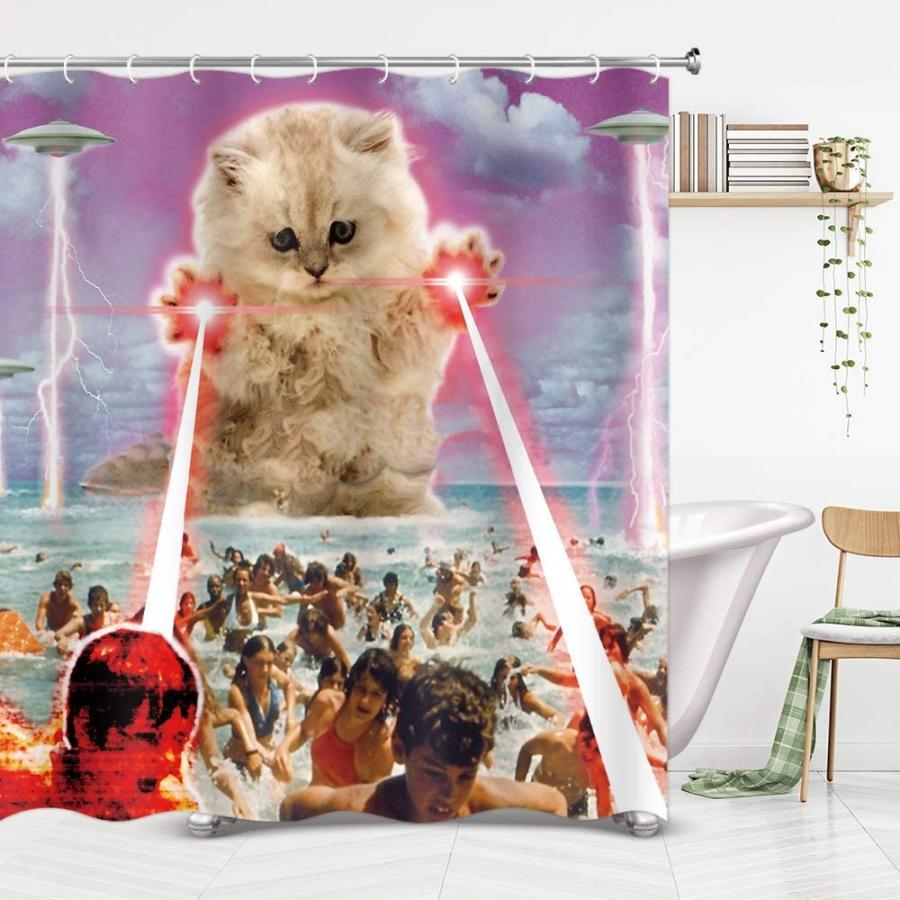 War of the Worlds was scary and all with giant robots that shot lasers at anything that moved. But what if they were giant cute kittens?! That's just what this weird shower curtain depicts. Whatever reason you may have to install this curtain in your bathroom, that's between you and the toilet. Just know that it'll surely be an instant conversation piece! Get it here 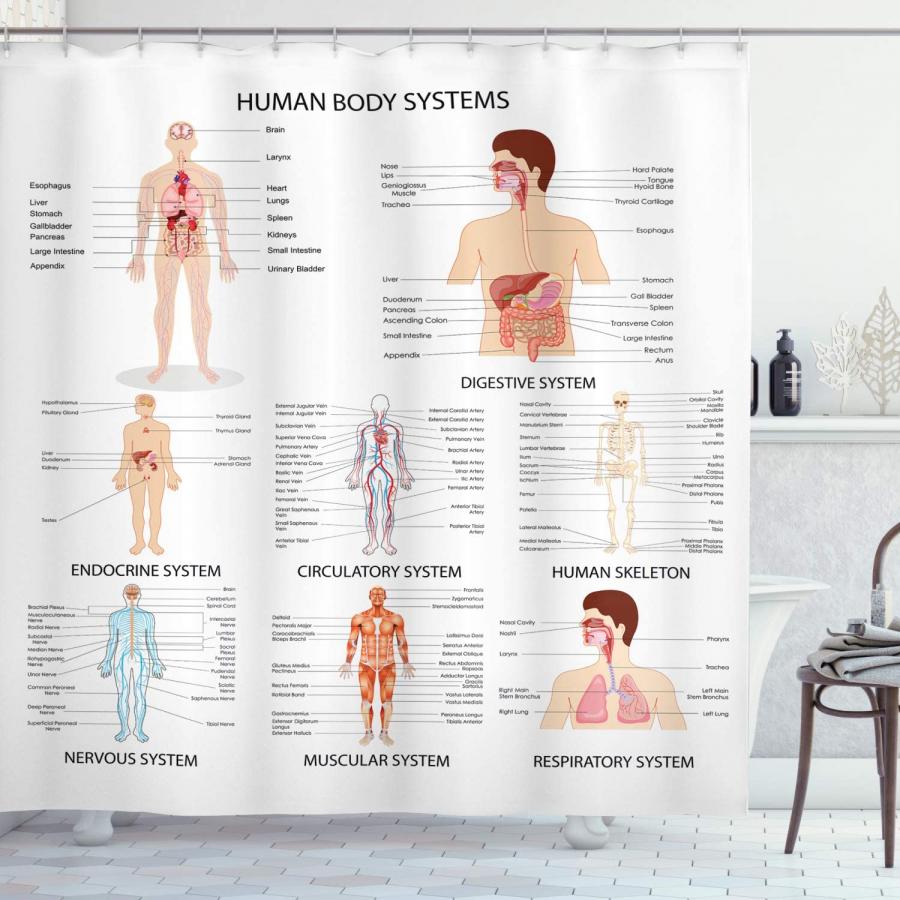 Maybe you're studying in med-school, maybe your child is learning about human anatomy in school, or maybe you're just a weirdo looking to creep people out who enter your bathroom. Whatever the reasoning for getting a human anatomy shower curtain is for you and you alone. Get it here 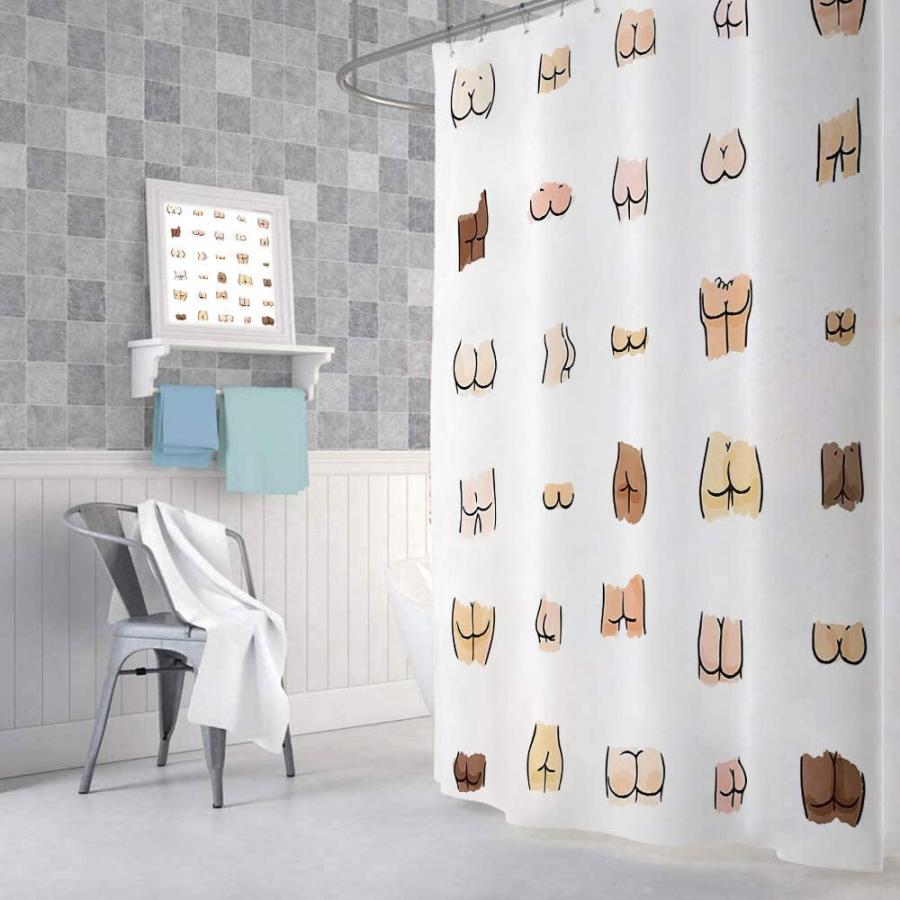 Rather than focusing on the entire human body like the previous shower curtain, this one focuses just on butts. It features many different drawings of butts, and shows you a wide array of butt shapes for you to enjoy before entering your shower. Get it here 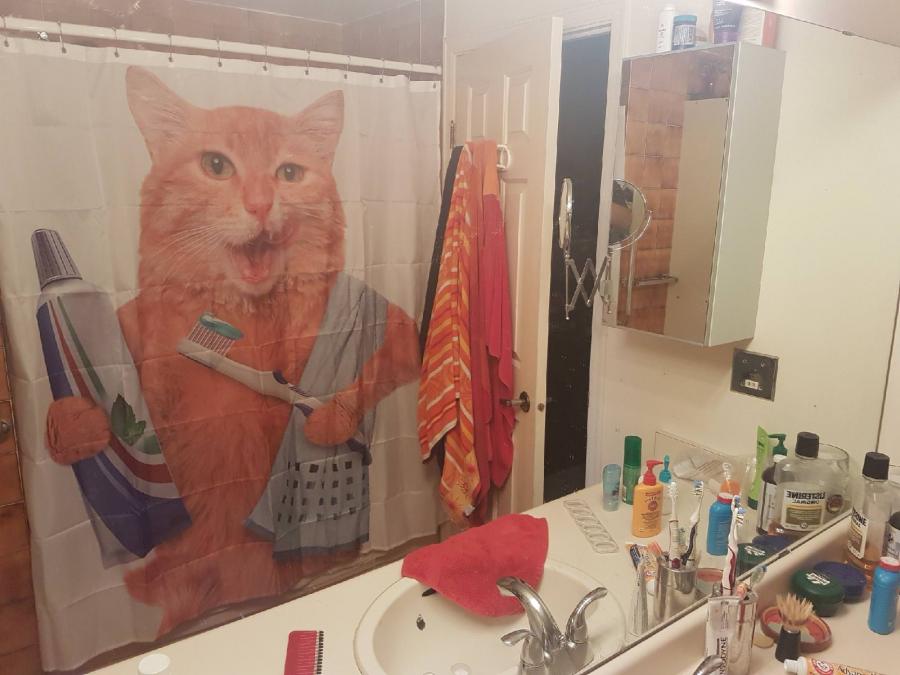 When your wife lets you pick the shower curtain, you take advantage of the situation and get a curtain showing a cat getting ready for the day while brushing their teeth with a towel slung over their shoulder. Get it here

An elephant pooping while sitting on a toilet shower curtain 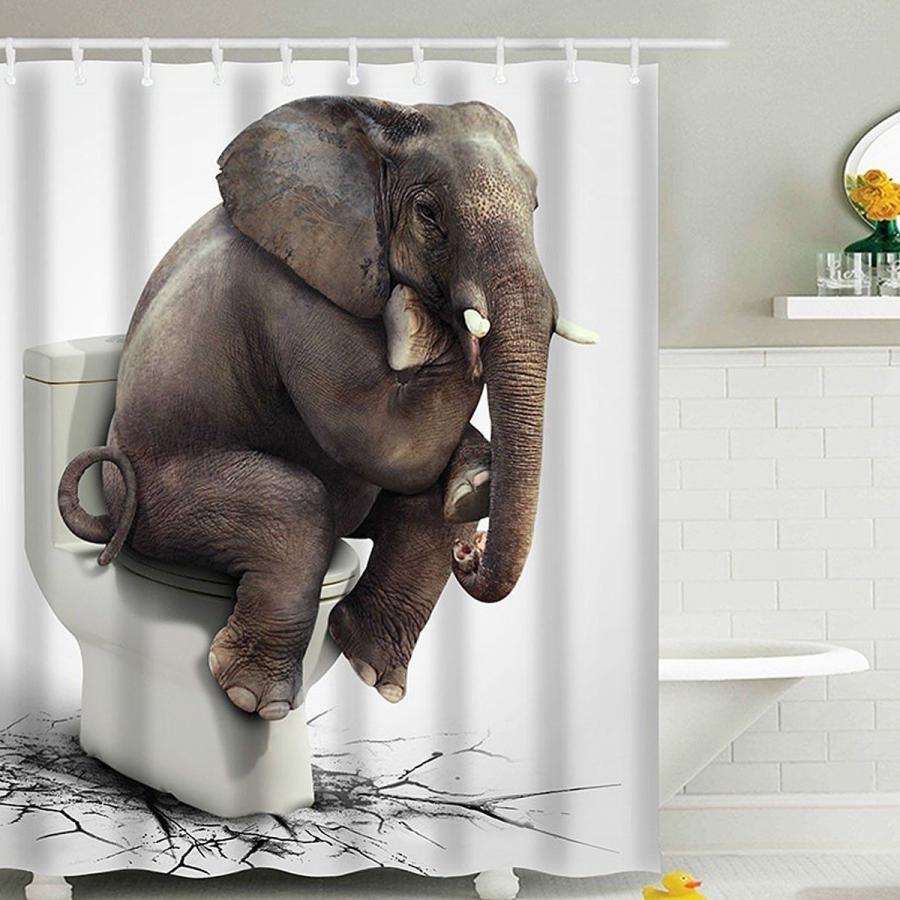 Instead of Jeff Goldblum staring at you while you poo, you can stare at an elephant while he poos with this ridiculous shower curtain. It must be a giant toilet to fit an elephant, plus it seems the ground is breaking beneath the toilet, so look out! Get it here 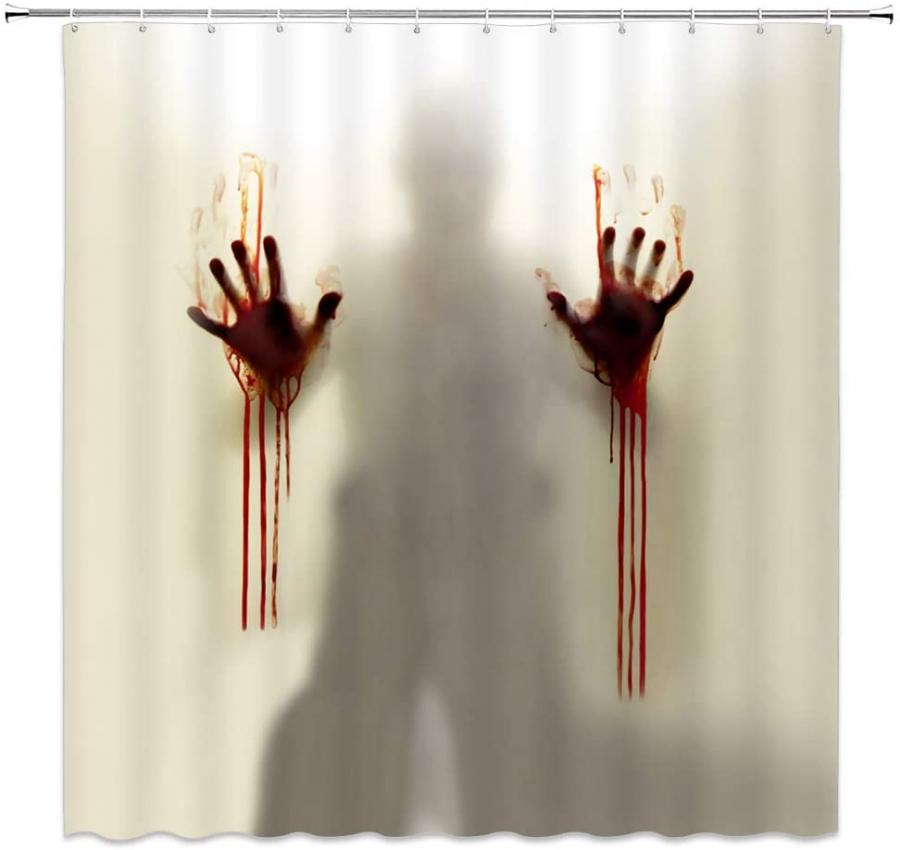 If you're looking to startle everyone who enters your bathroom, look no further! This creepy shower curtain features a dark shadowy figure that makes it look like someone's hiding in your bathtub. He's eve got bloody hands as he places them on the curtain! Sure to get s startle or two! Get it here 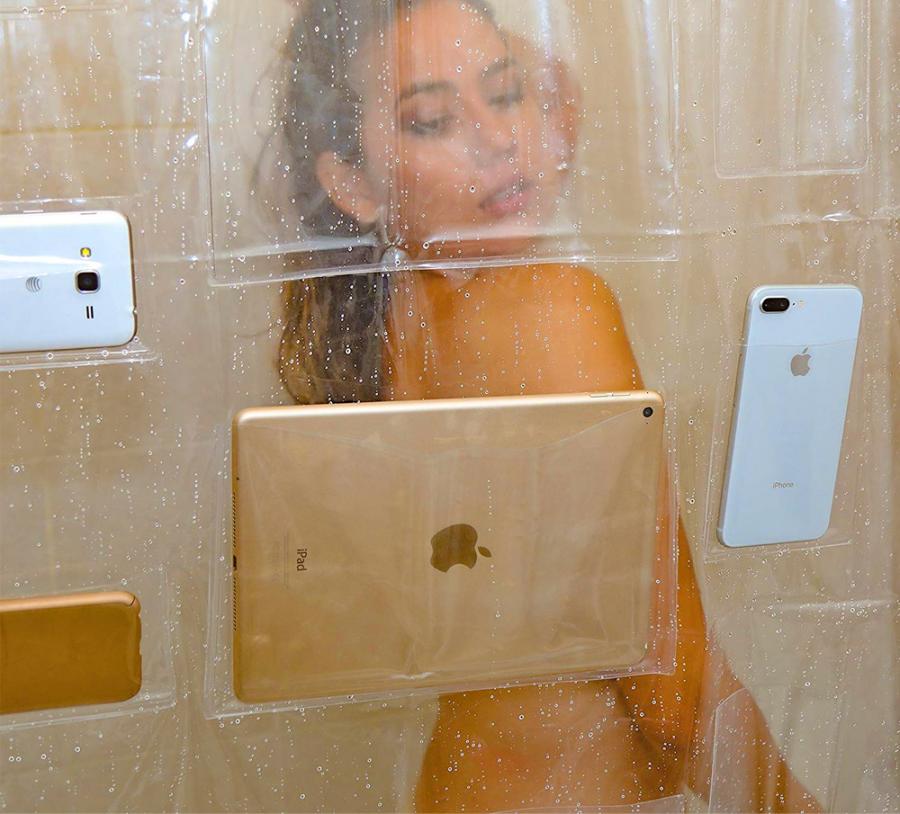 This unique shower curtain feaures several pockets where you can place a smartphone or tablet, and allows you to play games, watch movies, have a video call, and more all while showering. It uses transparent material that allows you to use your phone while it's in the pocket. Get it here 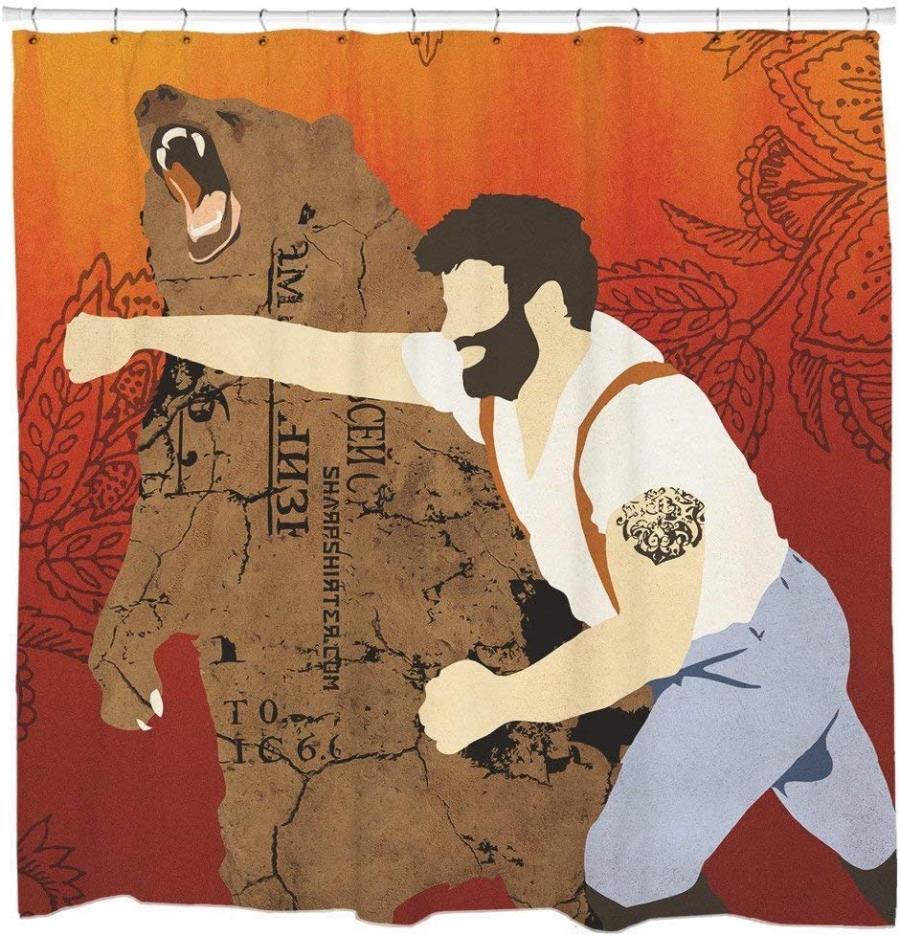 What better way to display your alpha status than hanging up this hilarious shower curtain of a bearded lumberjack giving a grizzly bear a haymaker to the jaw?! Everyone who enters your bathroom will surely know just how much of a badass you are after viewing your shower curtain! Get it here 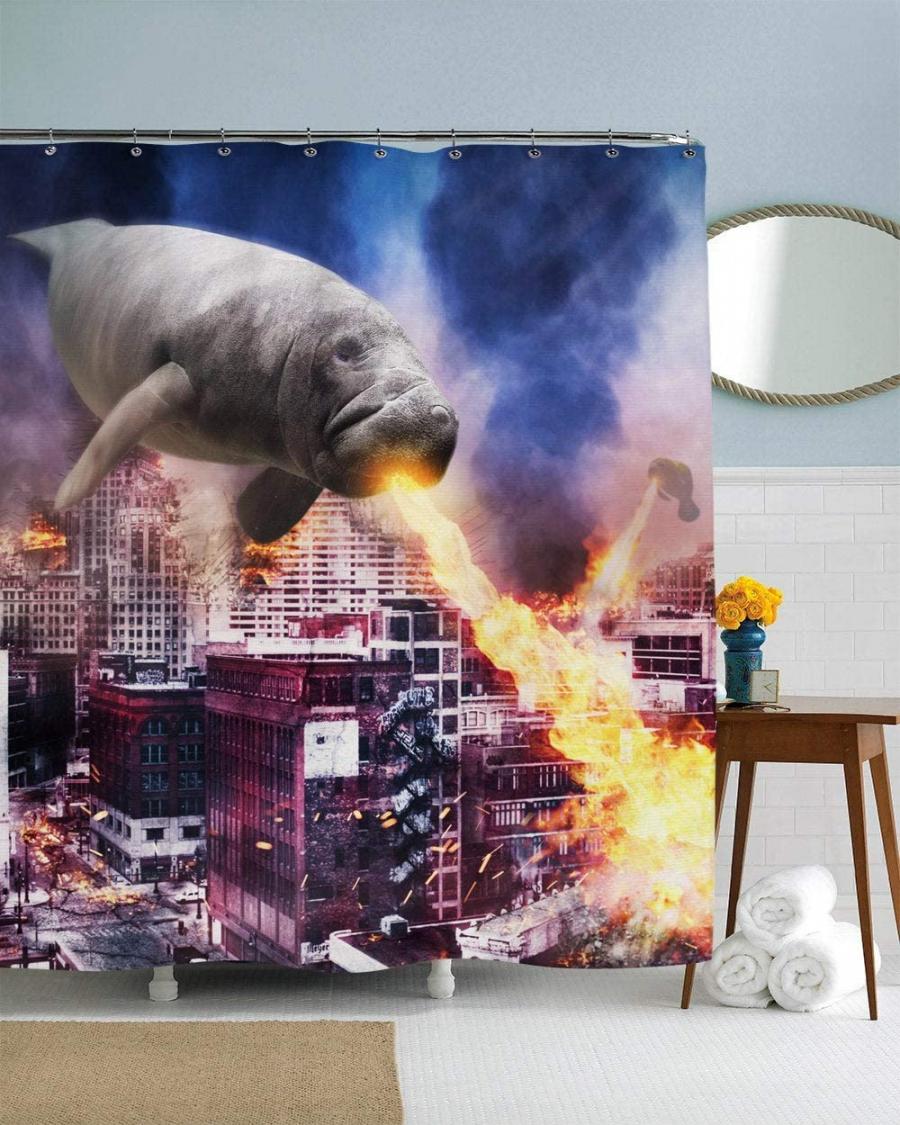 If you're looking for a weird shower curtain, you found it. Nothing is quite as odd an unusual as flying narwhals flying around a city shooting fire from their mouths while destroying a town. We can safely say your future wife will never allow this in their bathroom, so be sure to snag it up while you're still single. Get it here 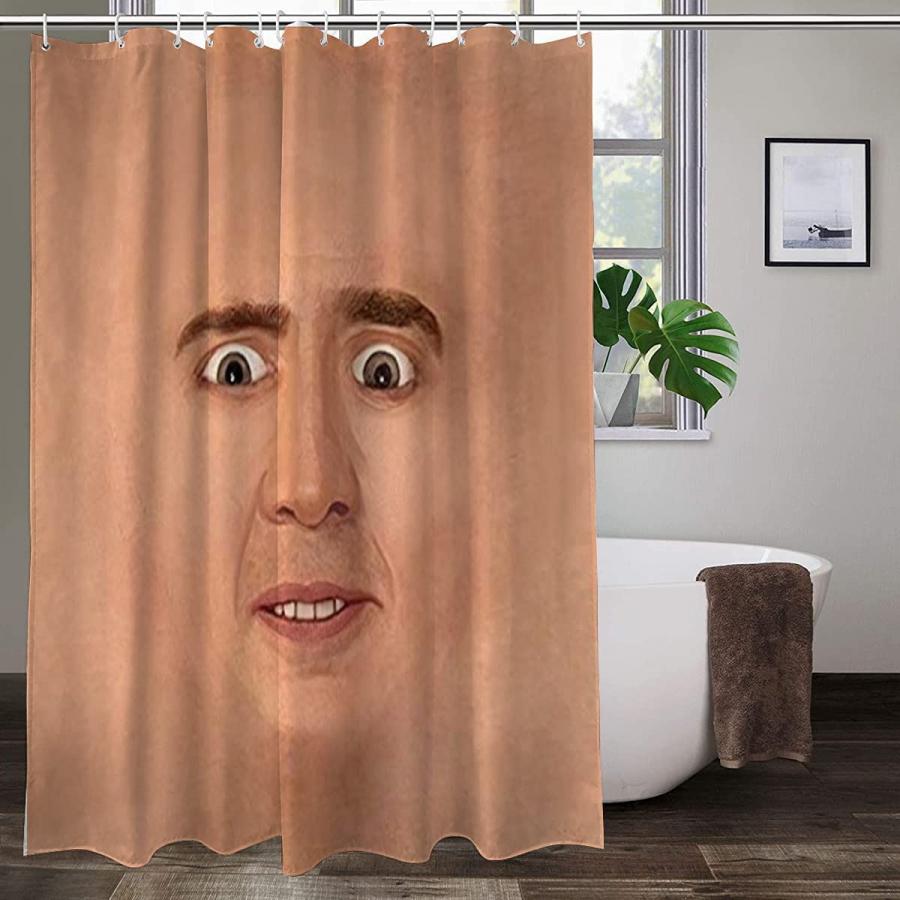 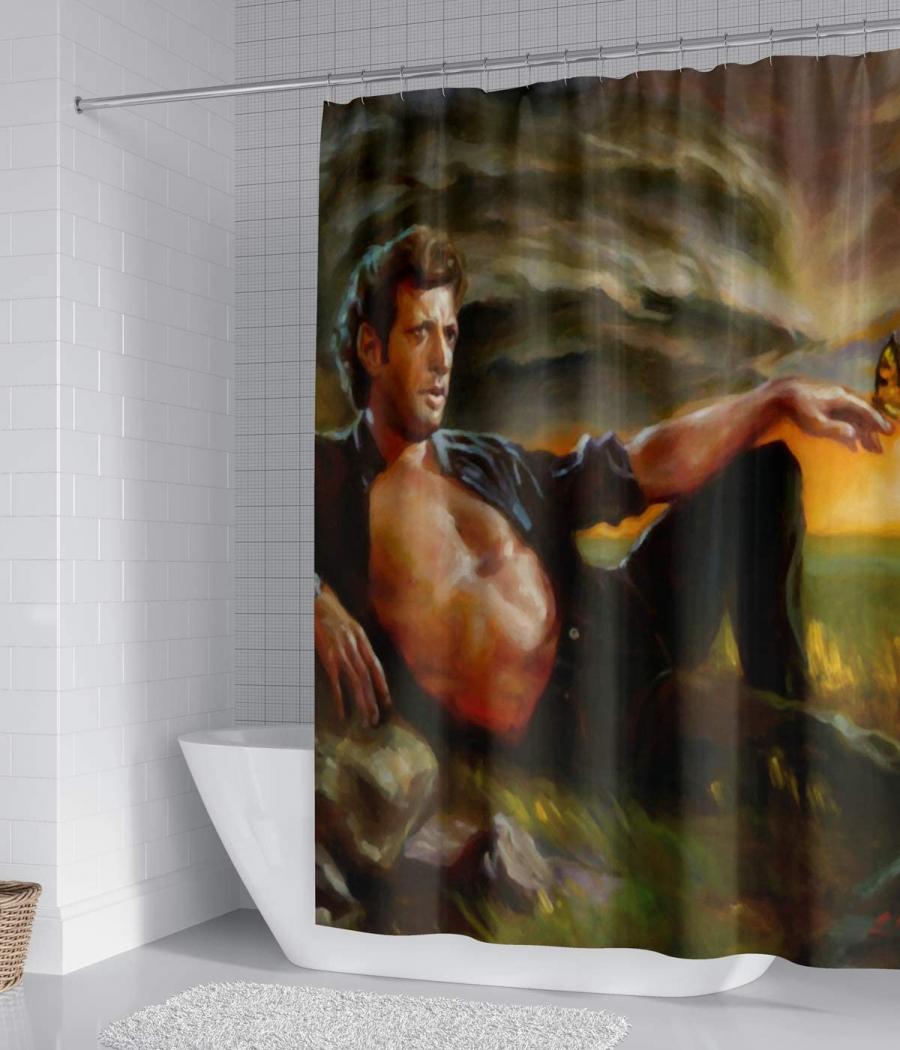 Yes, it's another Jeff Goldblum shower curtain. The internet can't get enough of Jeff, and it seems neither can we! It's the classic seductive pose by Jeff Goldblum from Jurassic park and it's put right onto your shower curtain for all bathroom guests to enjoy. What more could you ask for?! Get it here 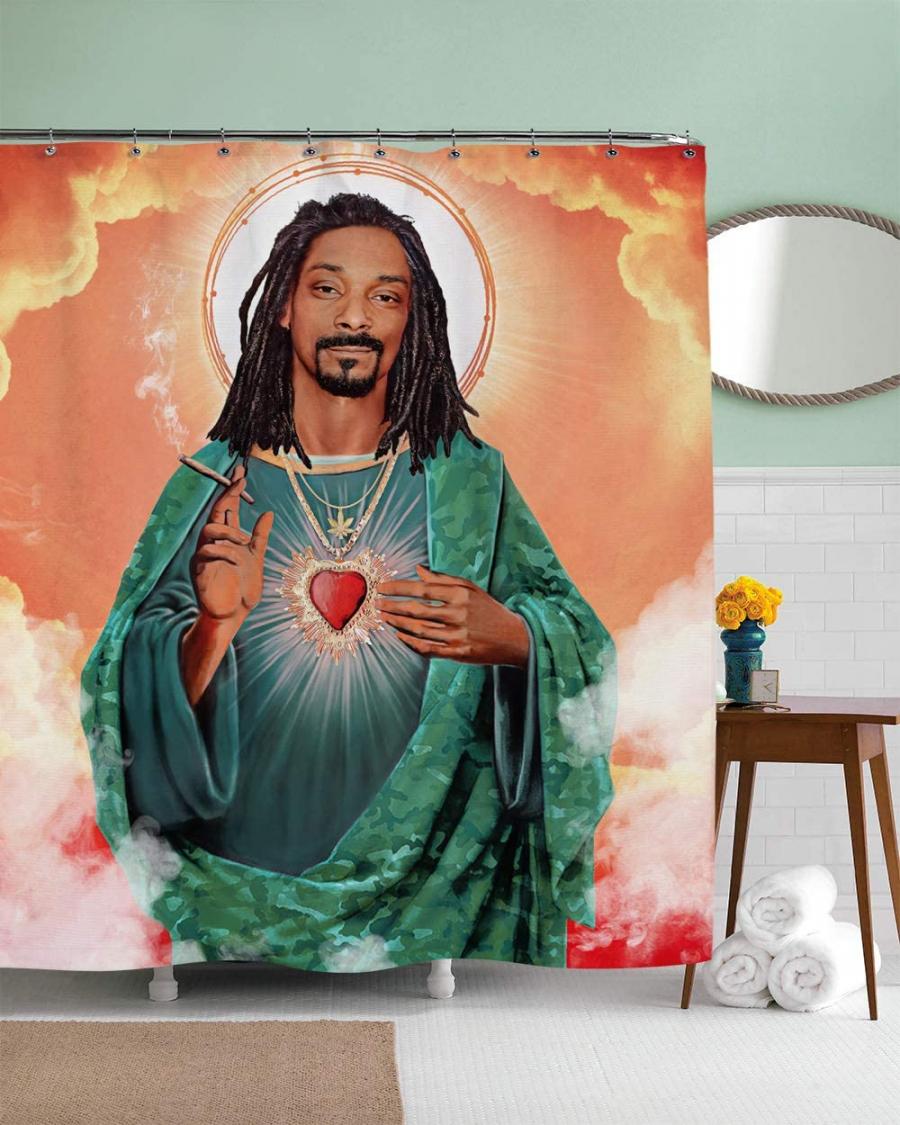 Give your bathroom guests what they want as they enter your bathroom, and that is a picture of Snoop Dogg as a holy God staring at them while they do their business. Get it here 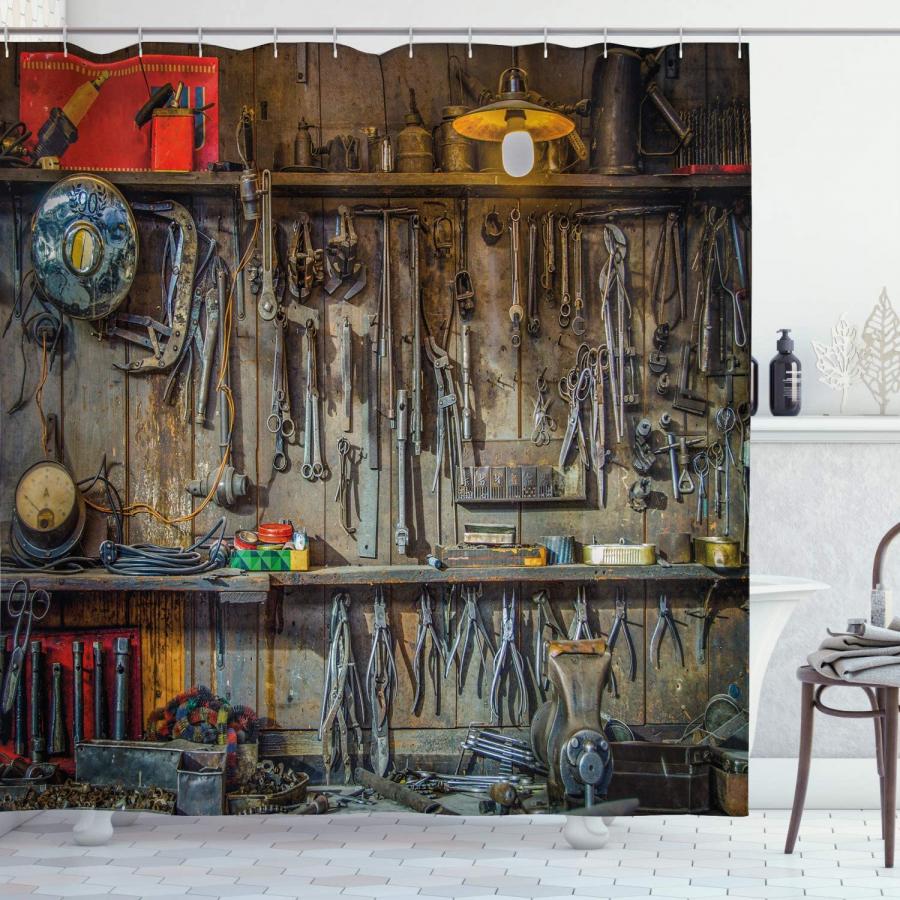 Why not just turn your bathroom into your garage where every man feels most comfortable?! This funny shower curtain does just that! It features a picture of a garage wall that's absolutely filled with tools! Get it here

Jesus I Saw That shower curtain 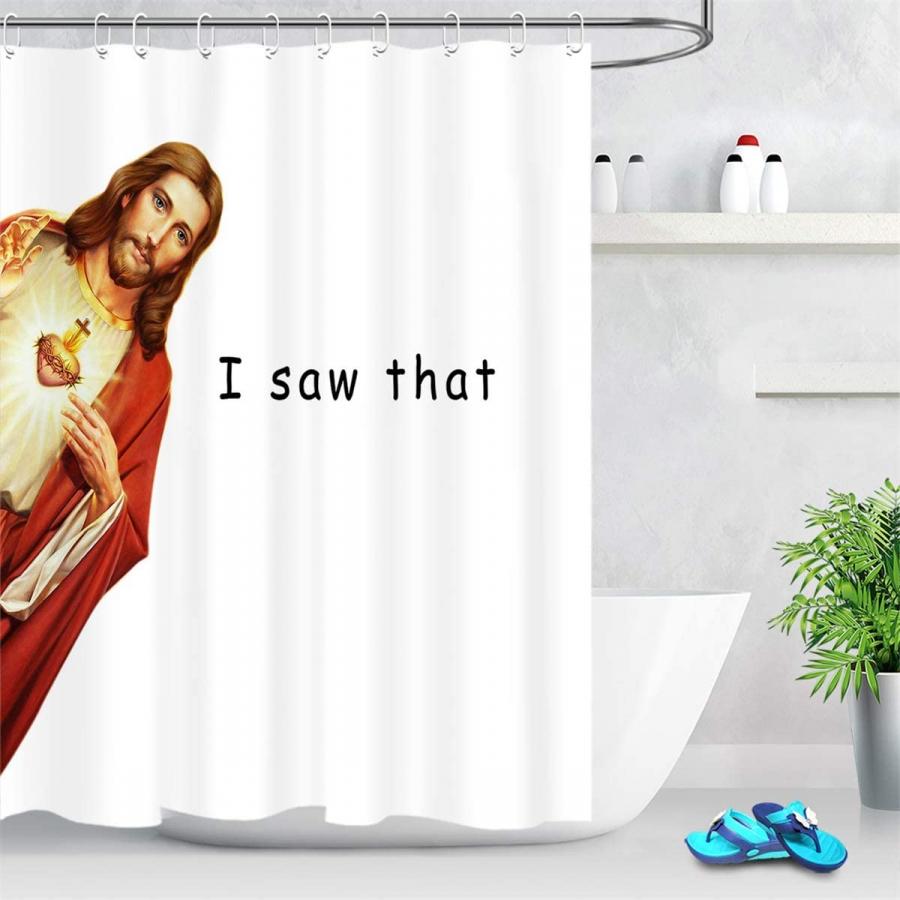 There's plenty of sinning to do while in the bathroom! So you may need Jesus to keep it a little more tame while you're not around! This hilarious shower curtain features Jesus peaking in from the side and saying "I saw that". Get it here 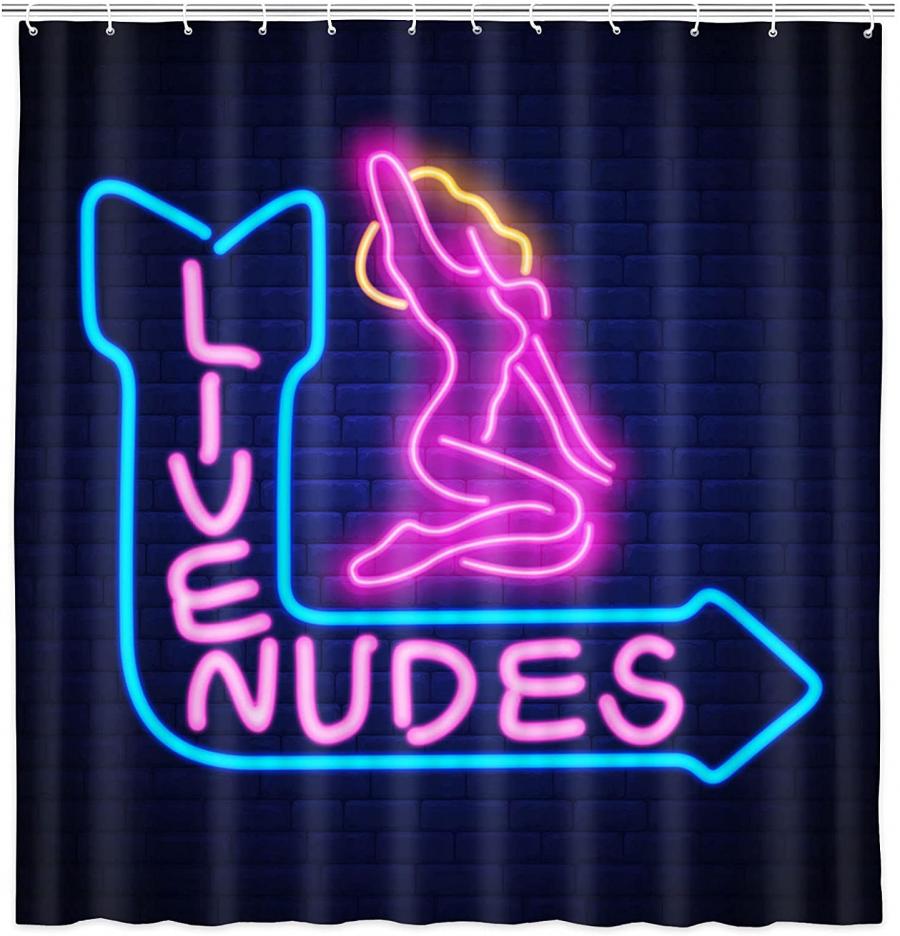 It's really not a lie to say there's live nudes in your bathroom, since you'll of course be naked while showering. The live nudes shower curtain is a hilarious take, and it the perfect addition to any single man's bathroom! It 's made to look just like a real neon sign at a strip club! Get it here 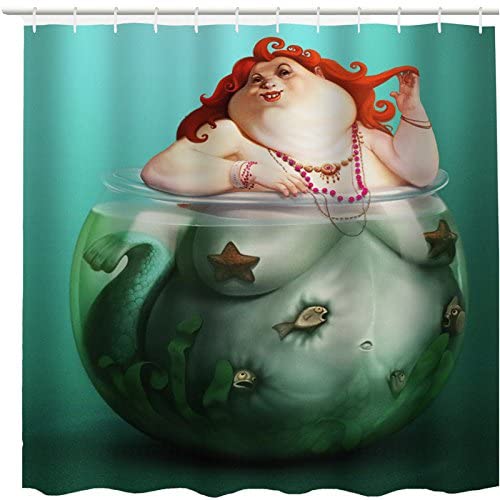 If you're looking for a weird shower curtain, this might be one of the weirdest. It's a large and in charge mermaid that's sitting in a extra-large fish bowl. Is it your dream to find your very own mermaid? Perhaps you can with this unique and quite frightening shower curtain. Get it here 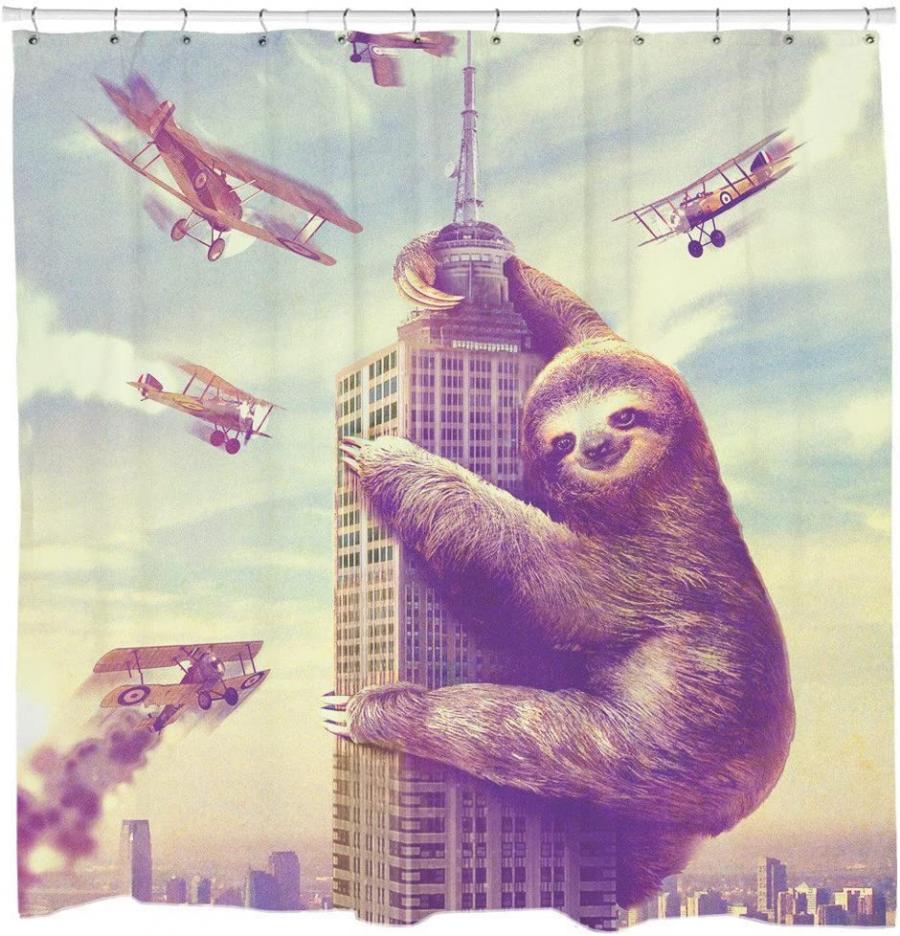 If you're a fan of King King and Sloths, chances are you'll love this extra weird shower curtain! It features a giant sloth that's climbing a skyscraper just like King Kong, while planes circle him in an attempt to take him down. Get it here