Check It Out
@facebook
Find on AmazonFind on Etsy 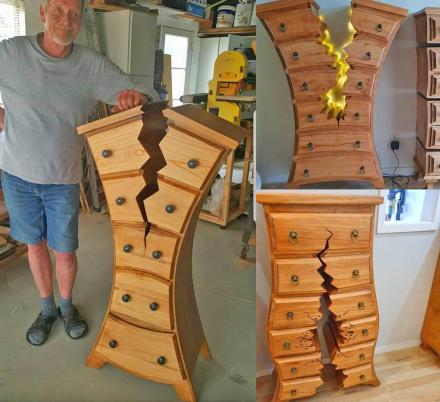 Having used a saw once or twice in my life, I know first-hand just how hard woodworking is. Having said that, this guy's work creating these incredible dressers that look like they've been cracked open are on a whole-nother level! The daughter of a professional woodworker named Henk Verhoeff posted some incredible photos of his work to a woodworking group on Facebook, and it's taken off like crazy! His unique designs on dressers, cabinets, and more look like they belong in a Disney movie or Fairytale of some sort.

His unique woodworking creations look like they've been curved, warped, and cracked open with a sledgehammer, though he's intentionally designed them this way, even with fully functioning drawers. The fact that he can not only create these fascinating cracked dressers, but also have working drawers that are fit into oddly shaped and warped structures, speaks volumes on his dedication to the craft. 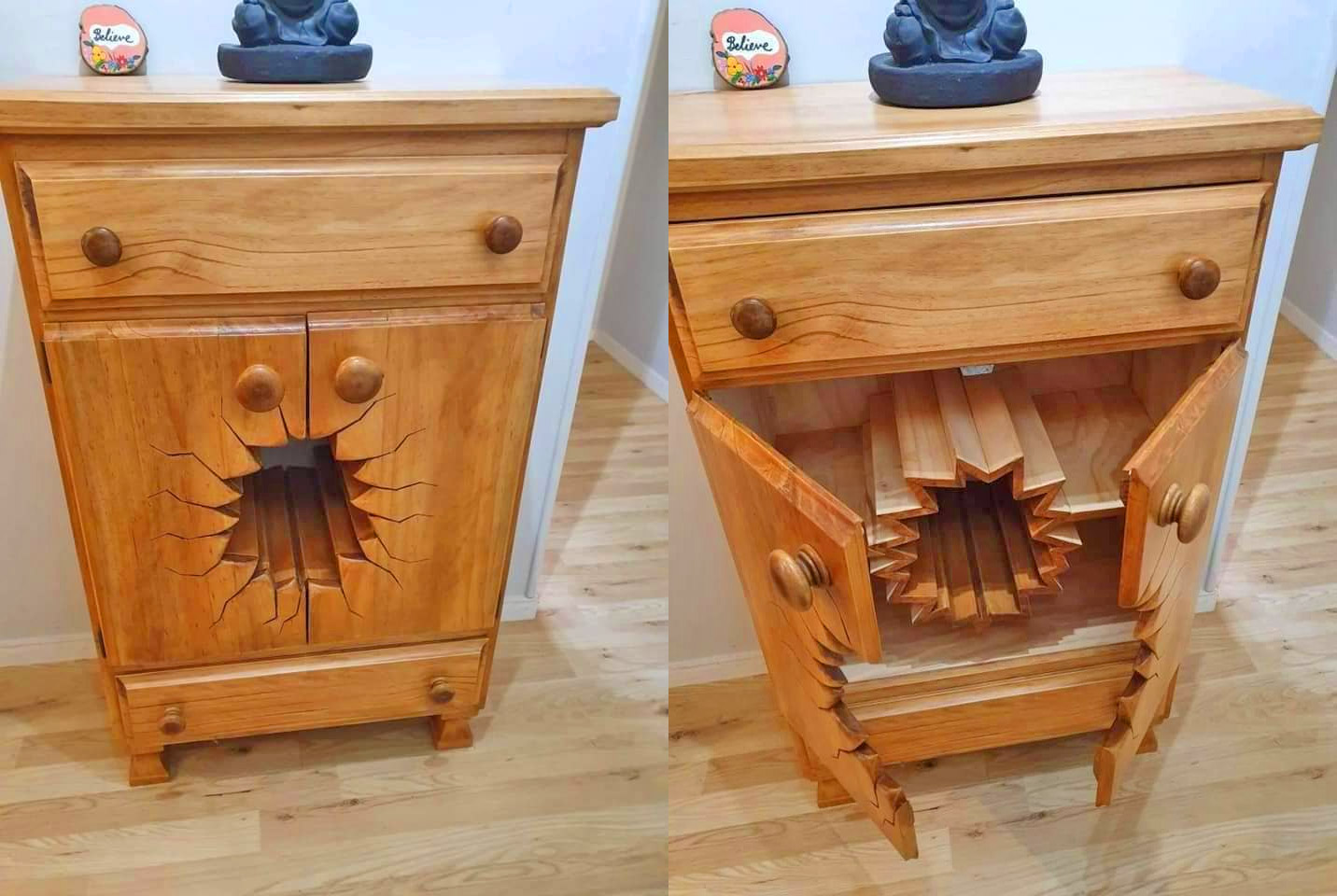 Taking around 80-100 hours per piece he works on, Henk creates his pieces using recycled New Zealand pine and sometimes Rimu if he can get his hands on some. Henk worked as a joiner/cabinet maker for 53 years which is not surprising after seeing his work. Woodworking has just become his hobby now rather than a job or career. Though that's not to say he couldn't sell some of his creations for a substantial amount of cash. 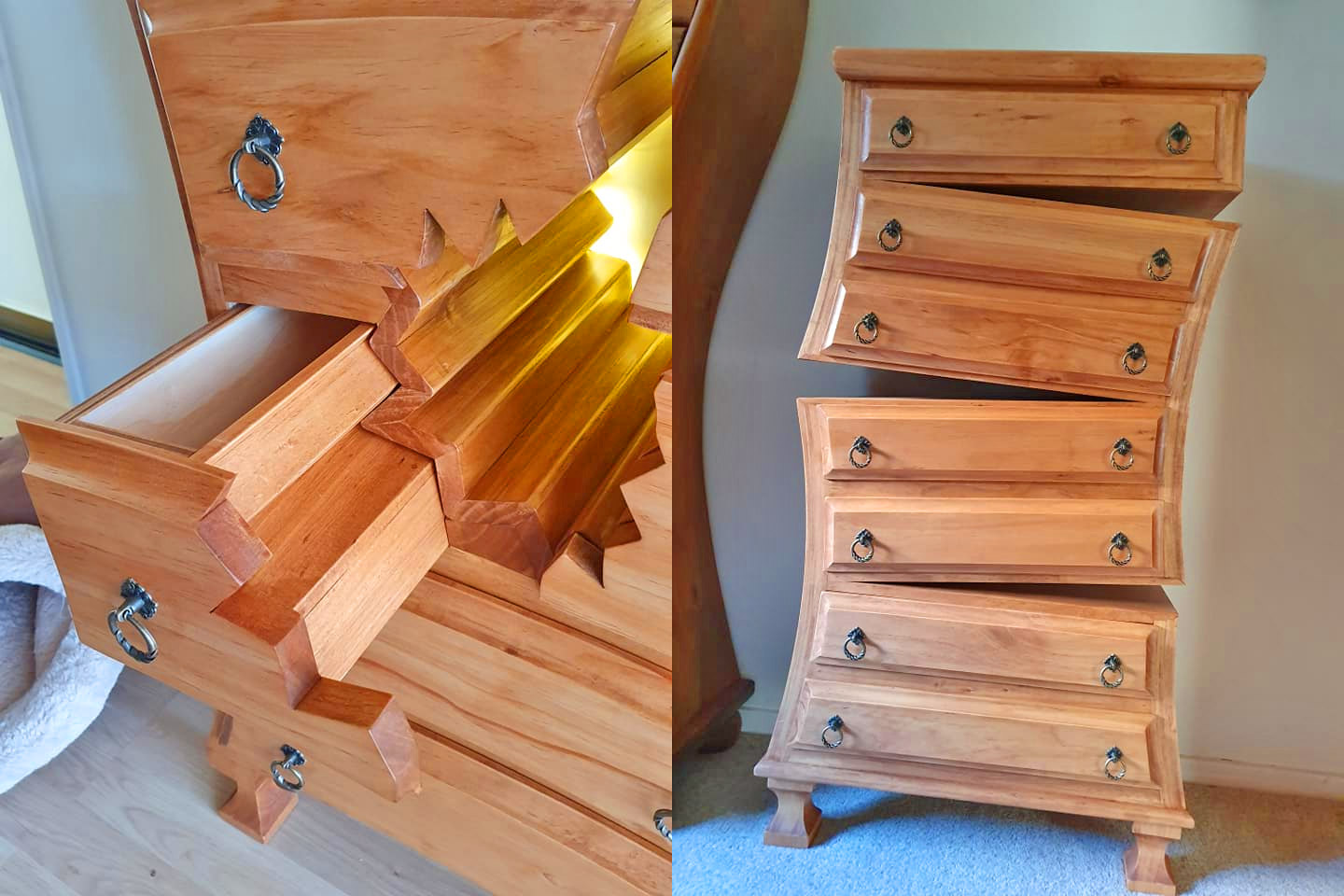 Henk doesn't create the warped and cracked design dressers to sell them, though he does say that once he runs out of room he may put a few up on Ebay for sale. For tnow the unique fairytale dressers are just lining Henk's home and hallways! 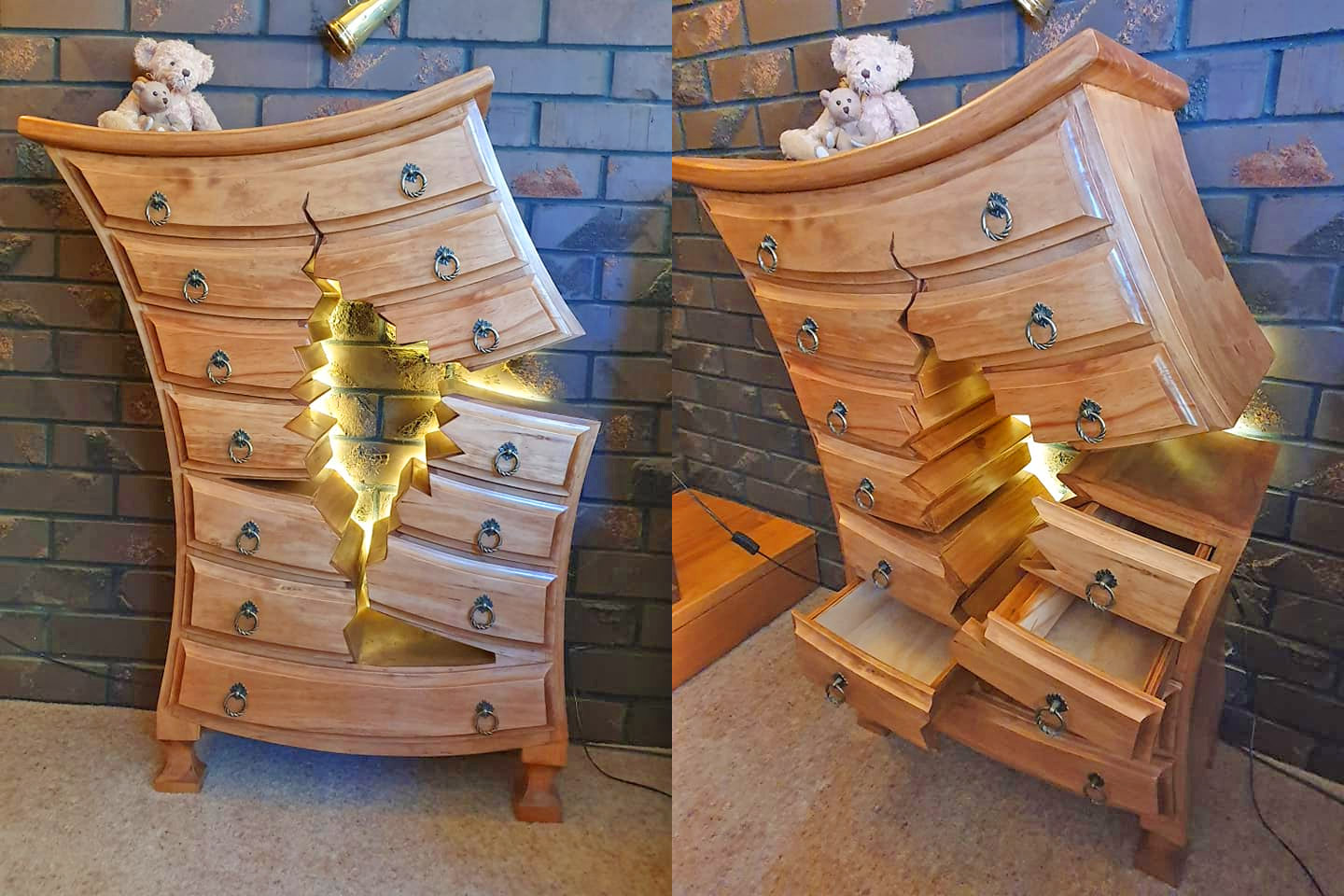 After speaking with someone at Bored Panda, Henk, the creator of the dressers states: "I describe my style of furniture as broken and weird. I like making weird furniture, something that you don’t see in a shop." 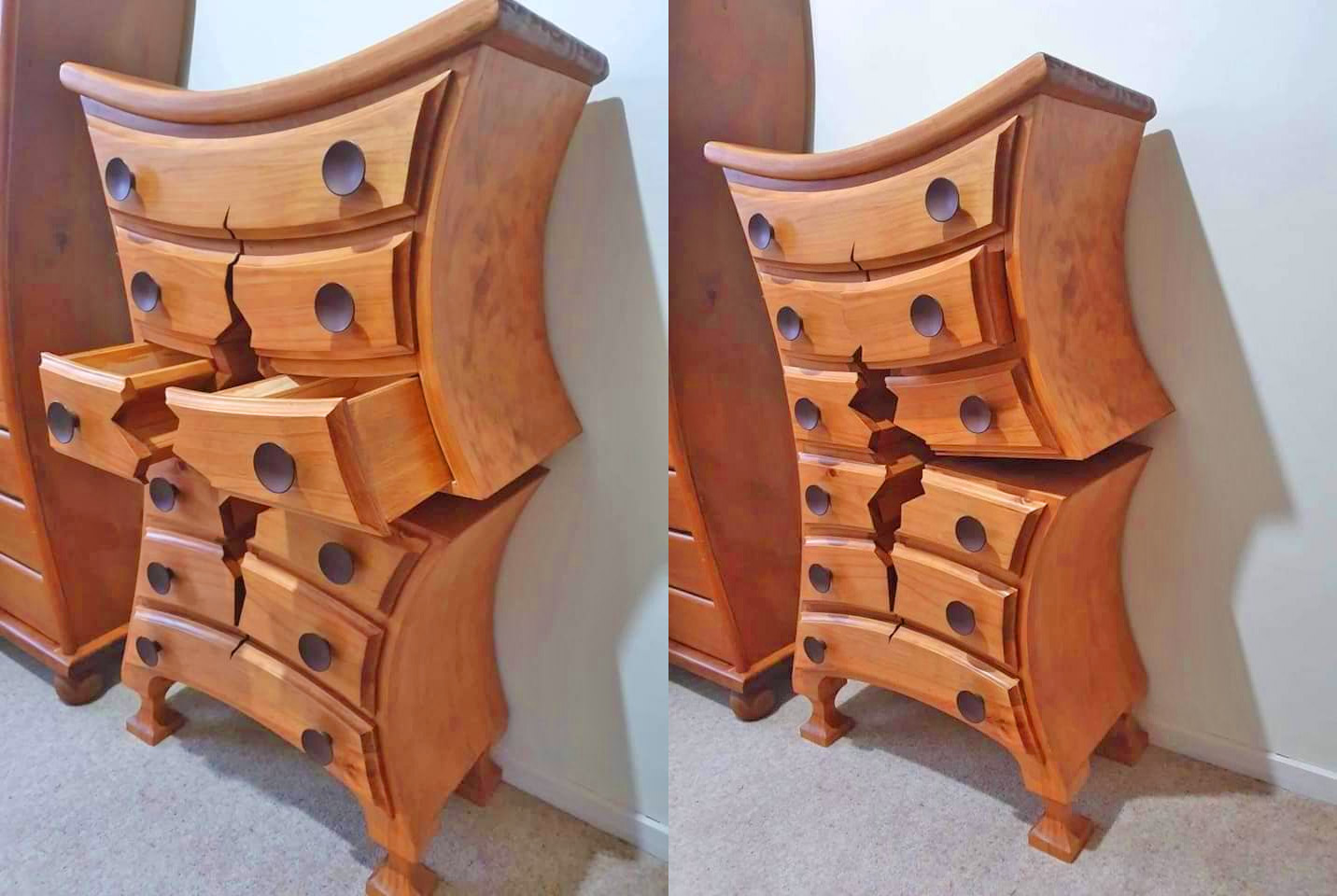 After Henk's daughters post went viral, she created a Facebook page dedicated to her fathers creations. She also states: "We are still looking into the best way to ship as this is a first for us. When he have all the information we will post a link to the first Ebay auction on this page." So stay tuned to the page for updates on the Ebay auctions. 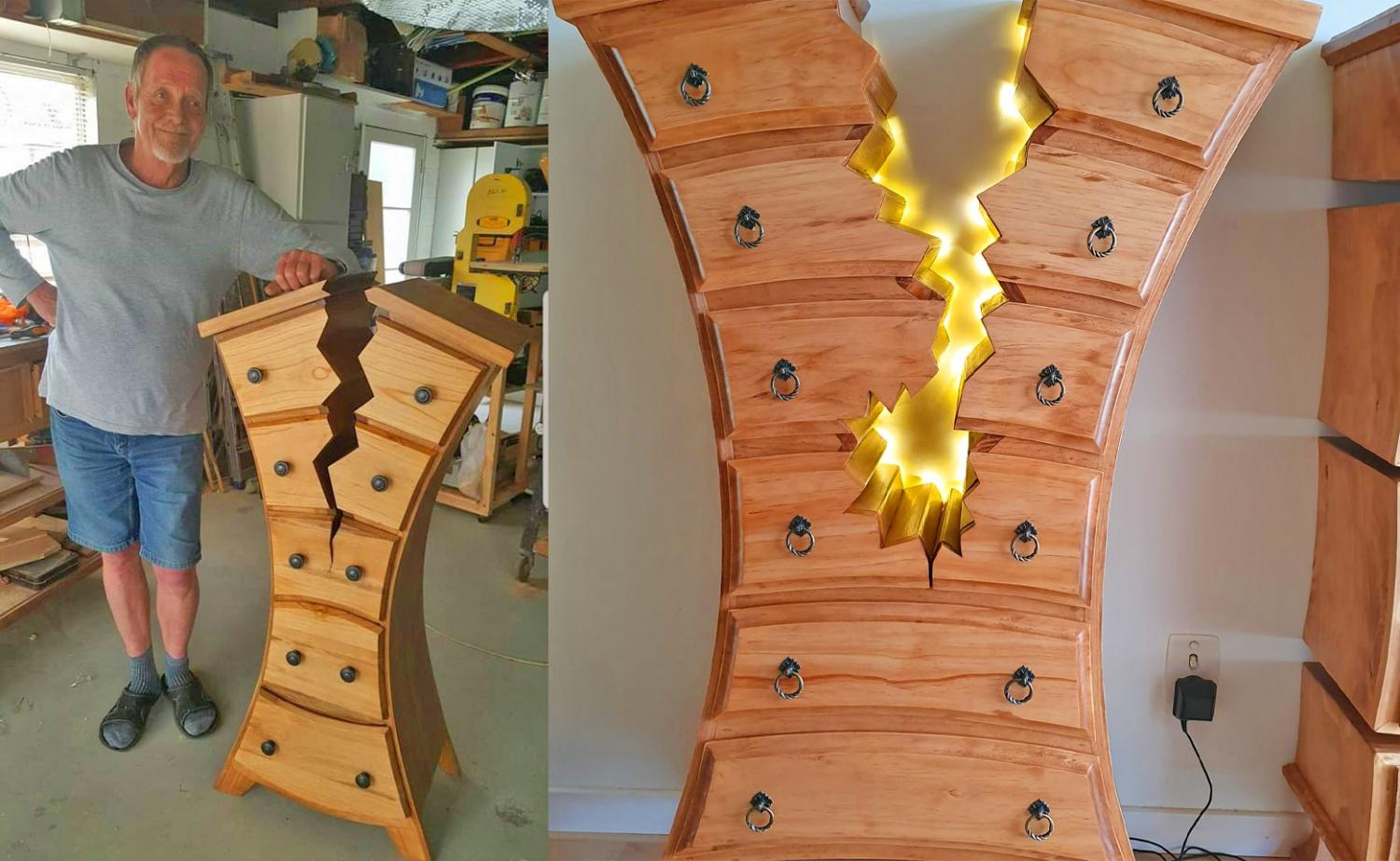 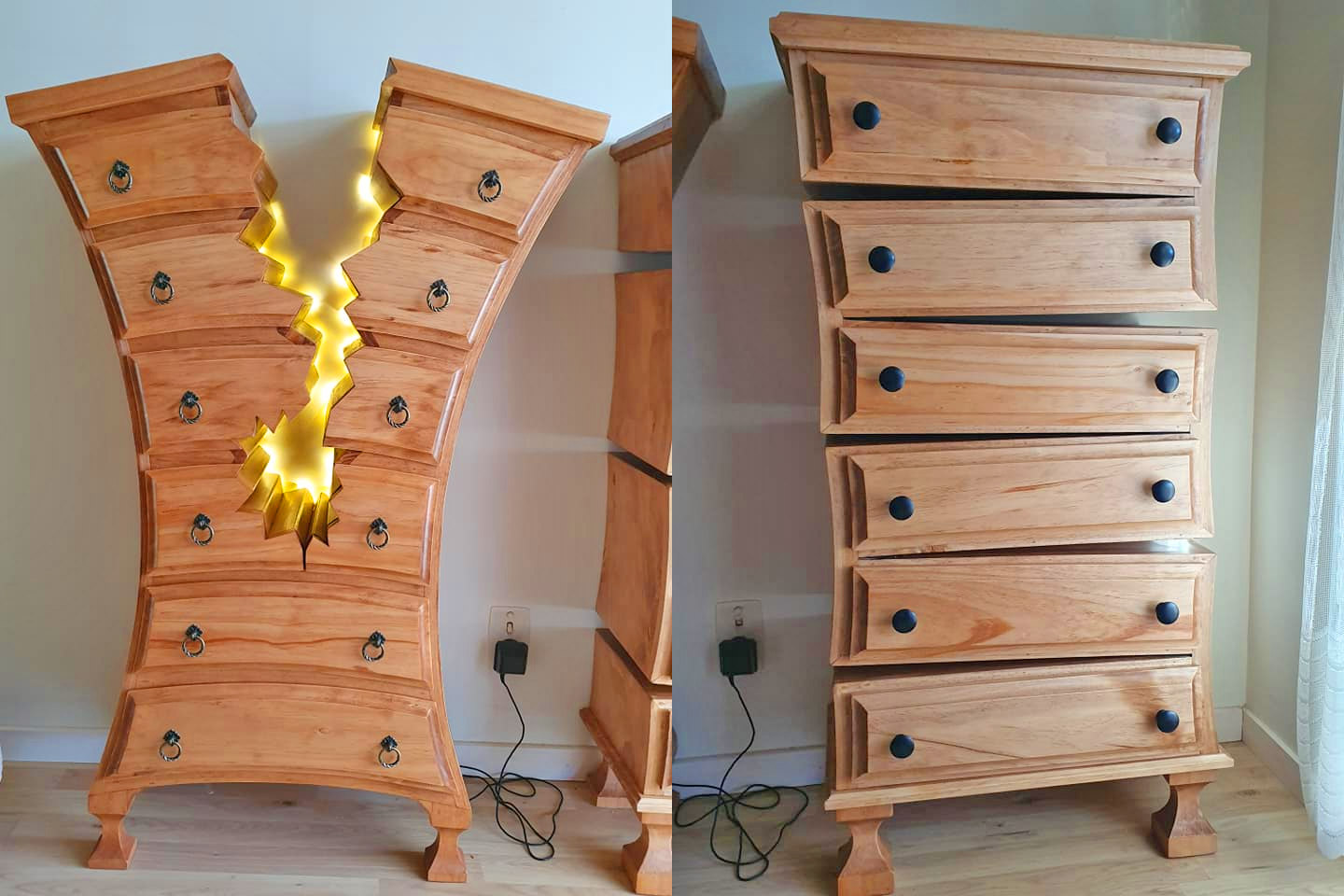 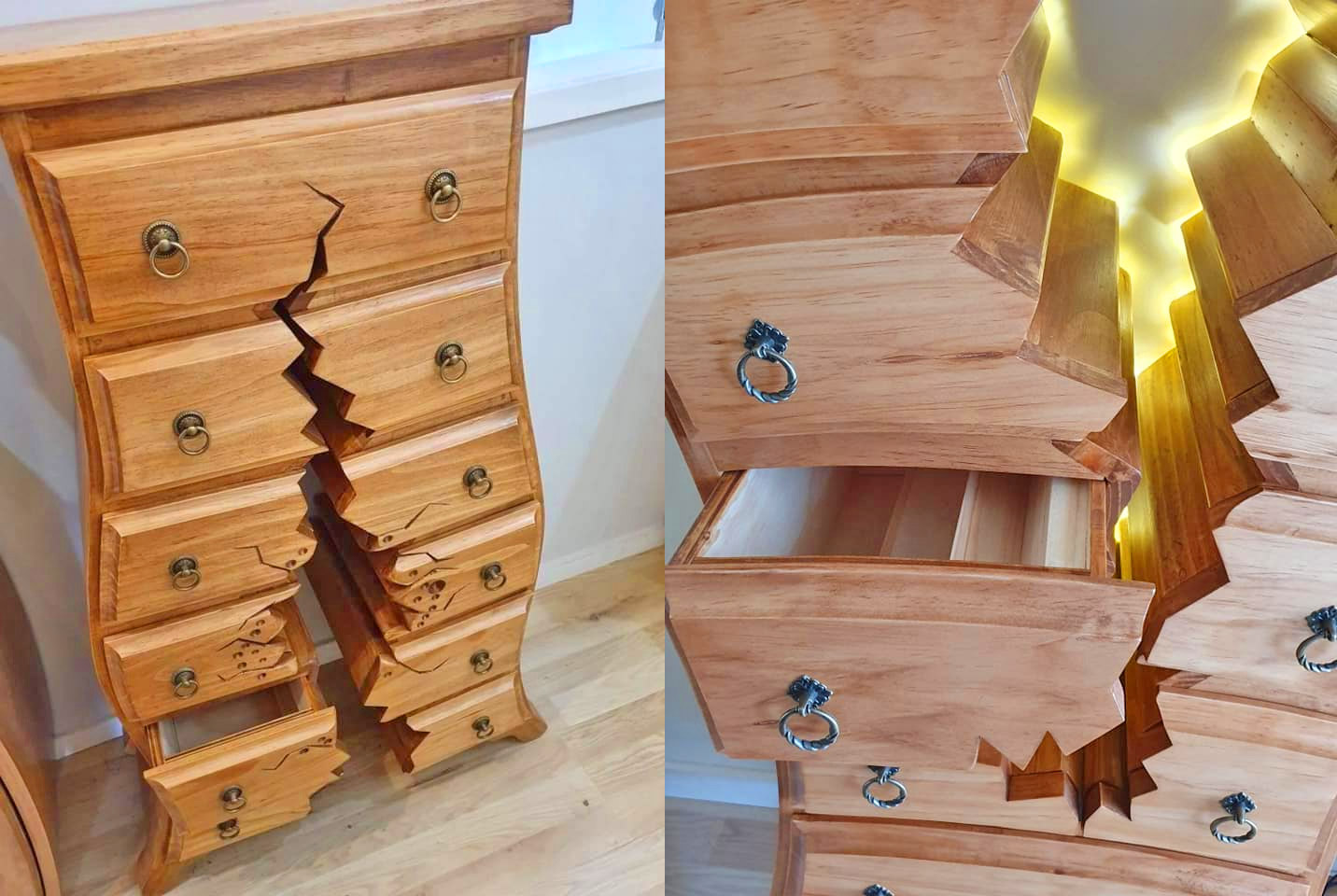 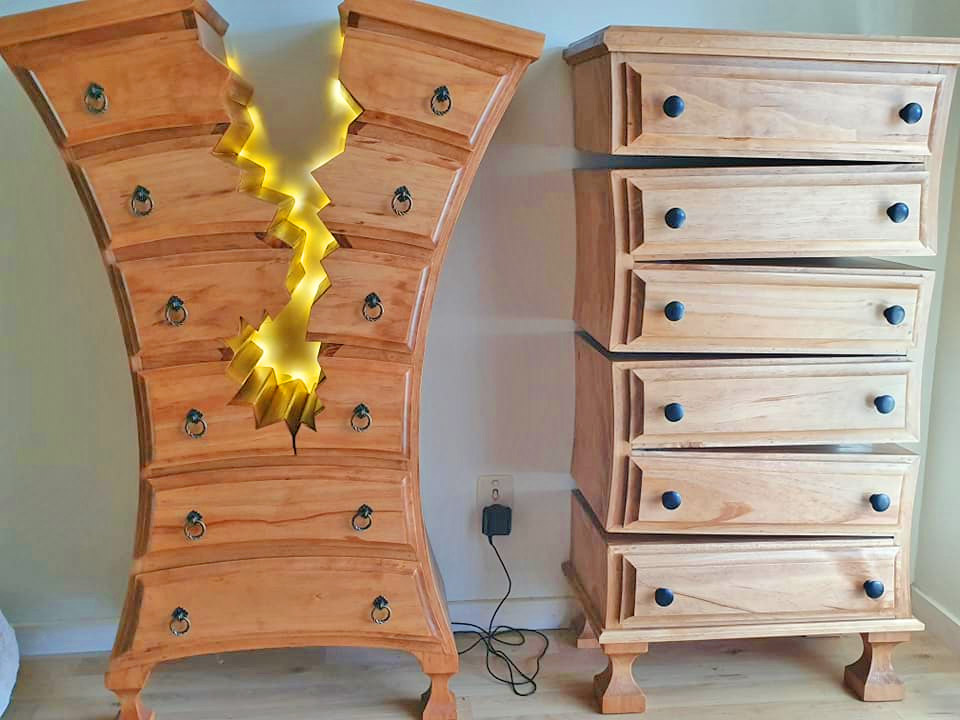 "This project took years to craft. Each piece of furniture, light fittings and detail has been handmade except for the porcelain and the dog. My mum made the bedding and some other little details. I created the polymer clay roast meal at the dinner table and perfume bottles in the bathroom. The globe is made using a golf ball that has been smoothed and painted.
It even has real parquet floors in each room." 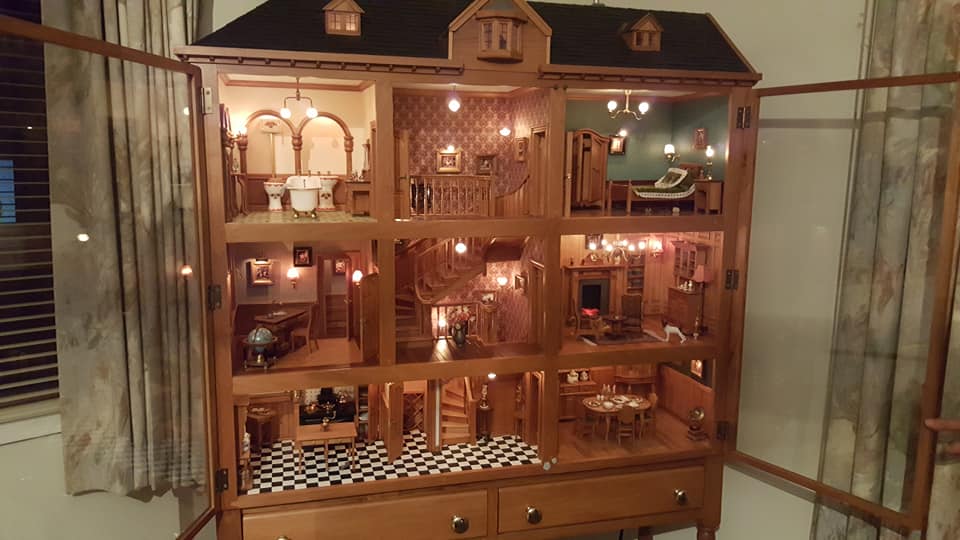 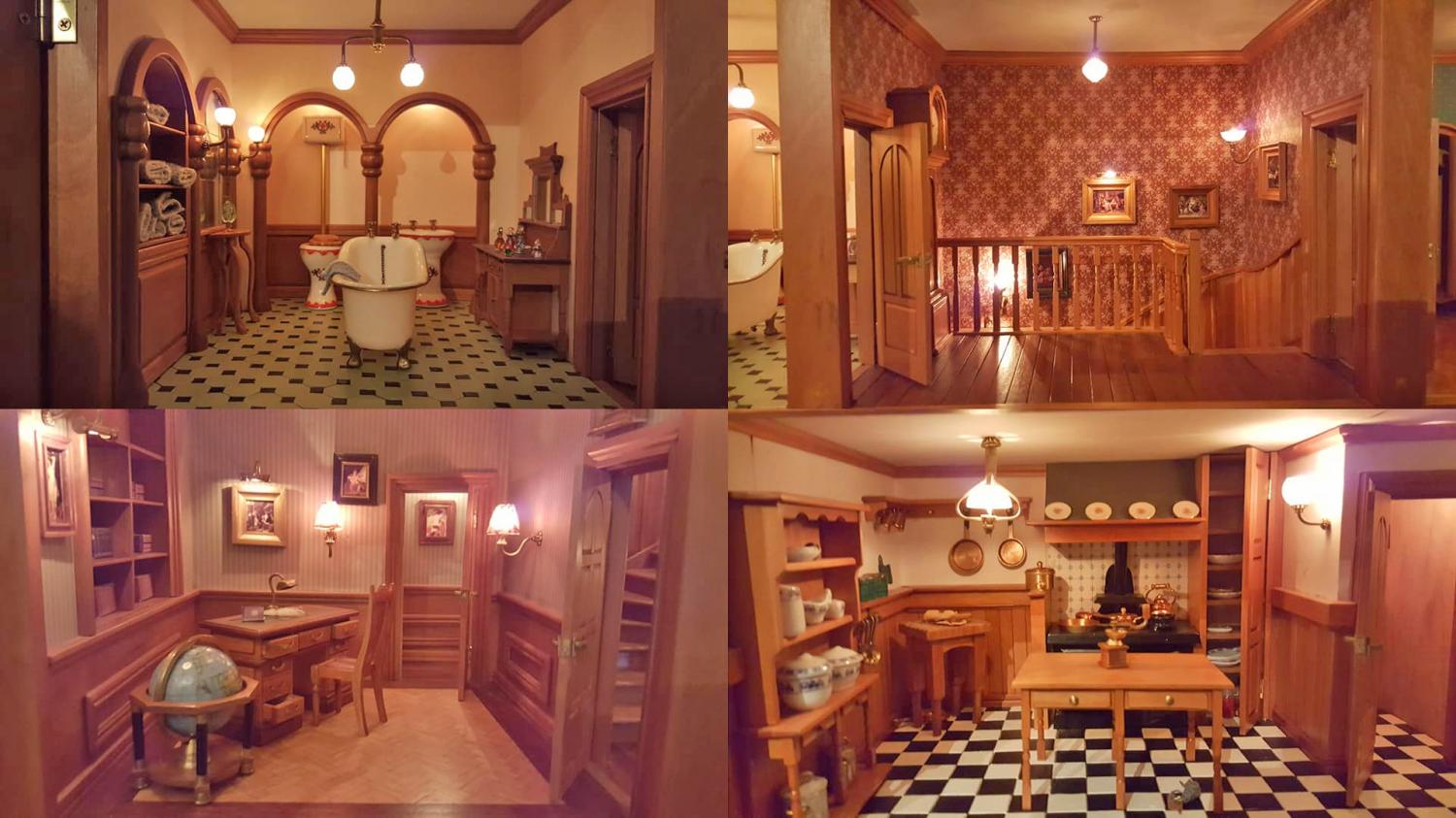 The plans for the dresser, and the end result: 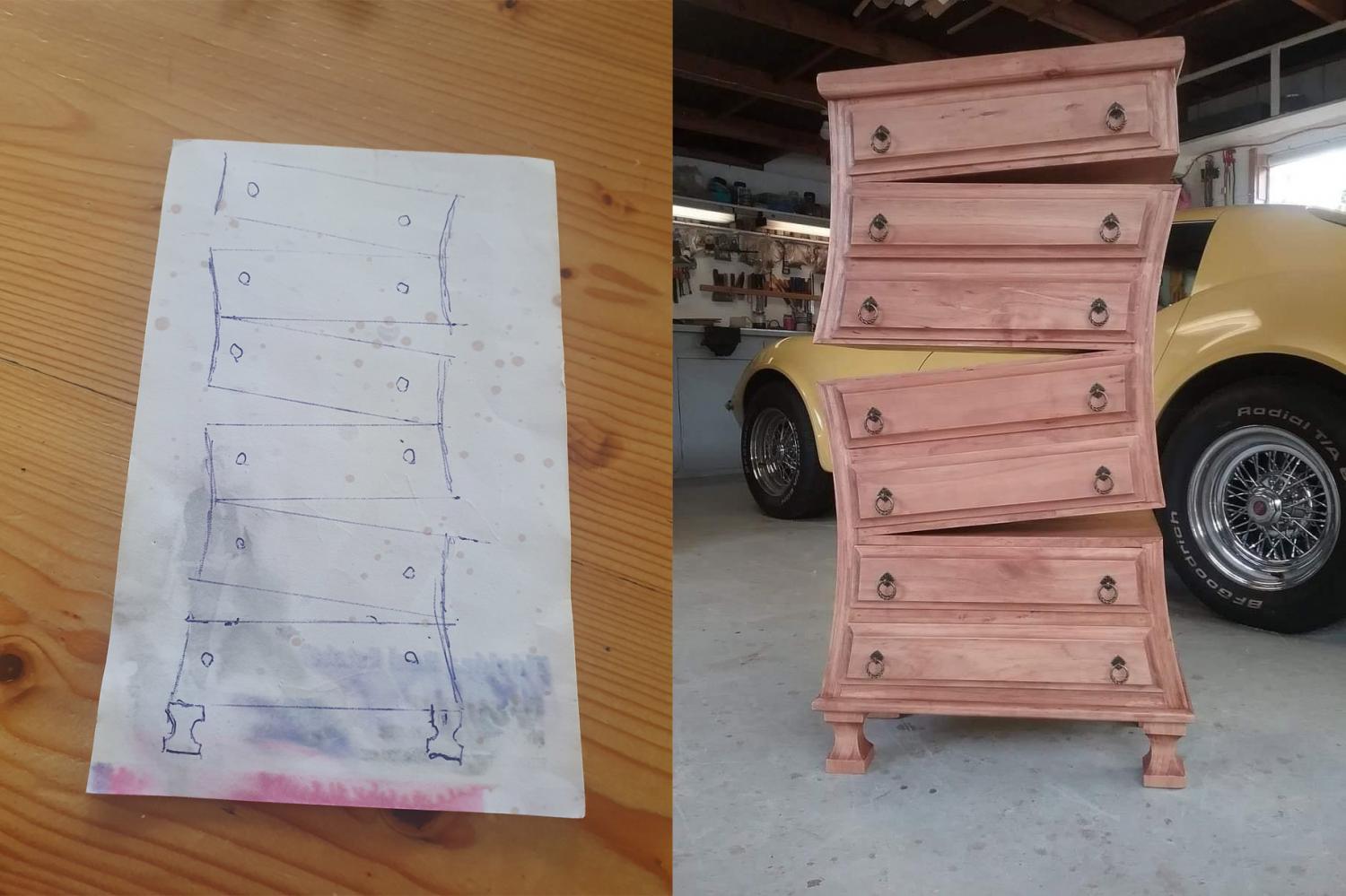 This unique dresser just looks like a pile of lumber, put pull the front open to reveal it's filled with secret drawers! 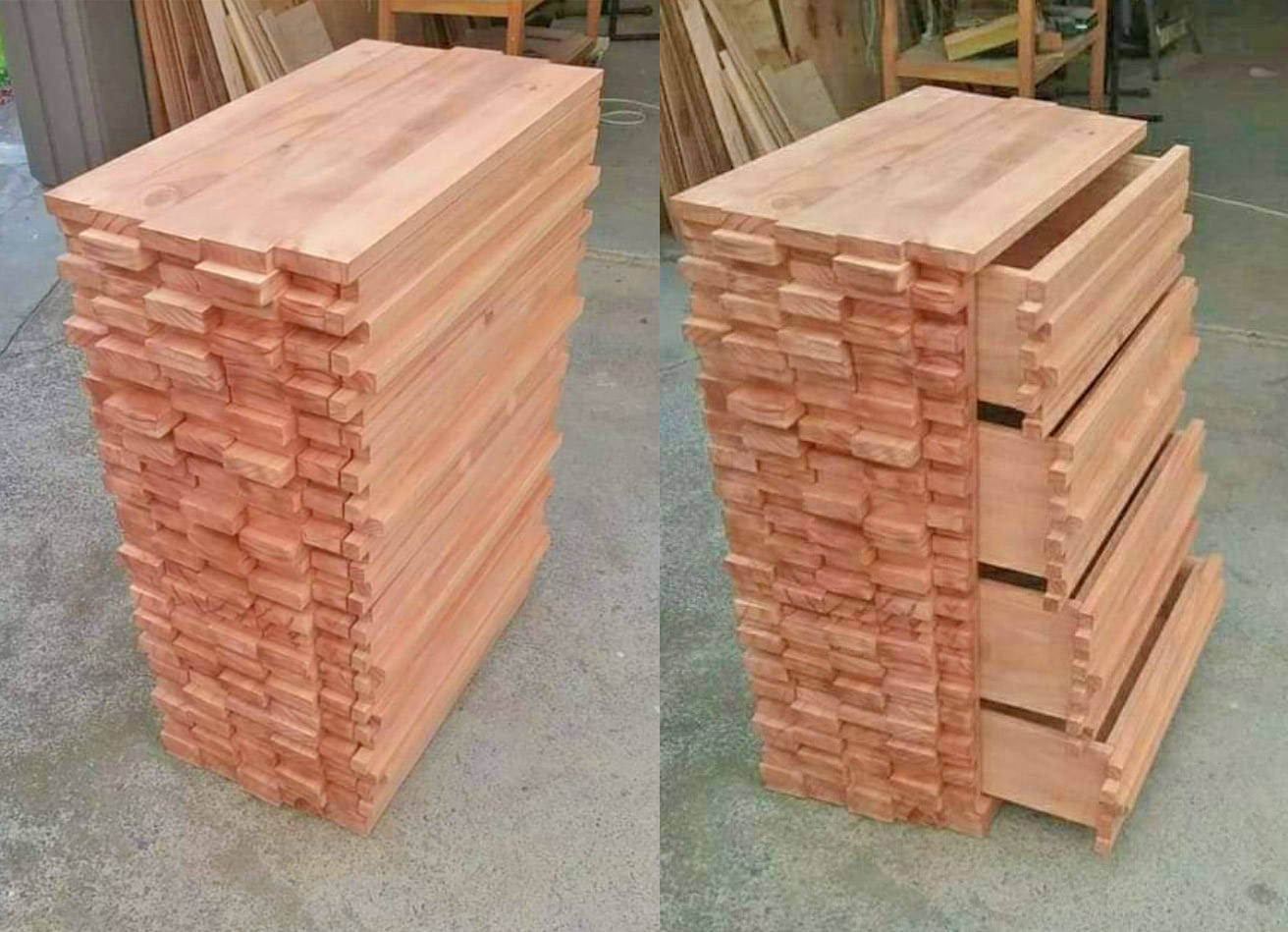 Henk's creations line their hallway in their home! 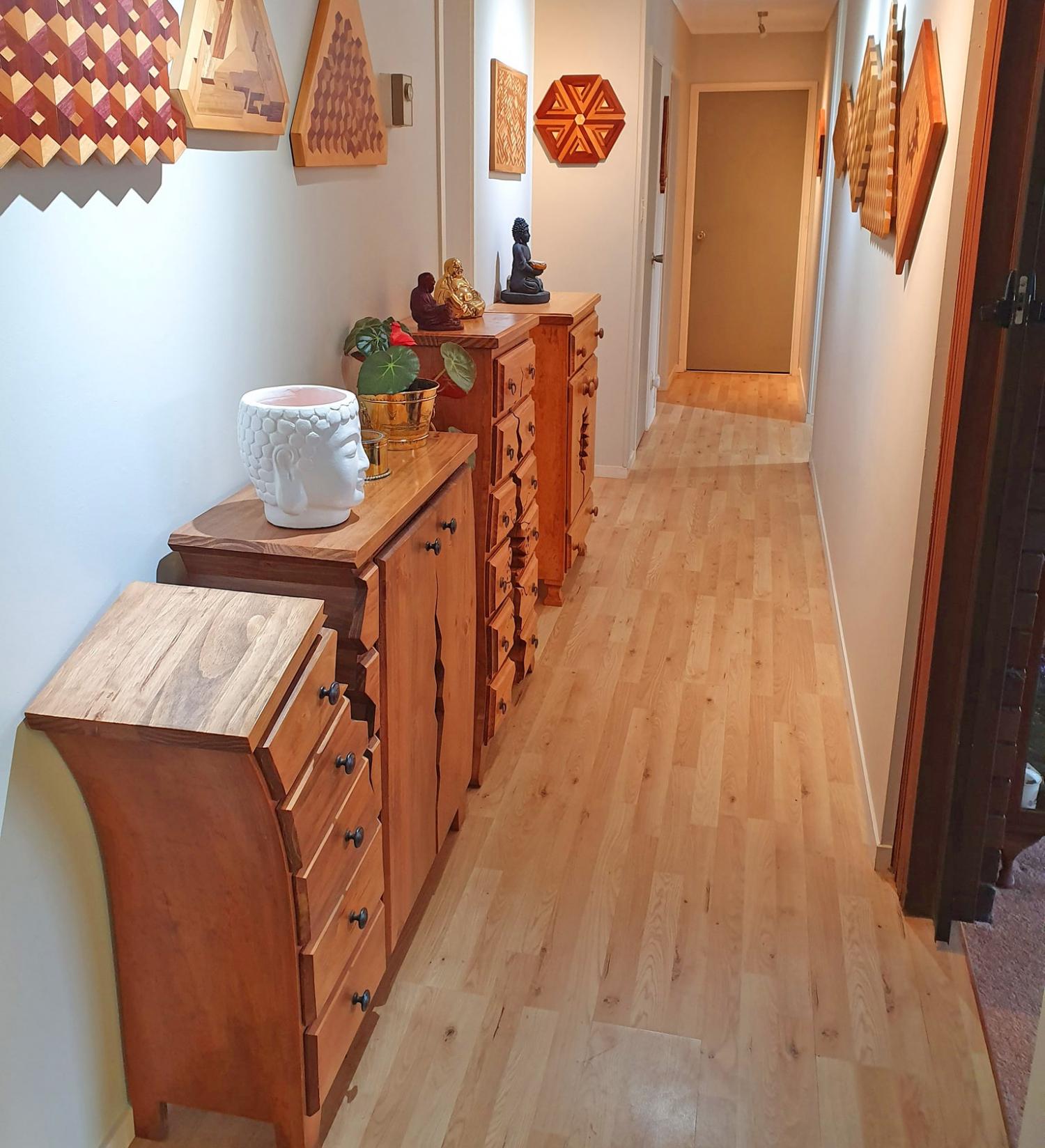 "I would like to share some wooden wall art that adorns dads Hallway. All crafted using only different timbers and glue." 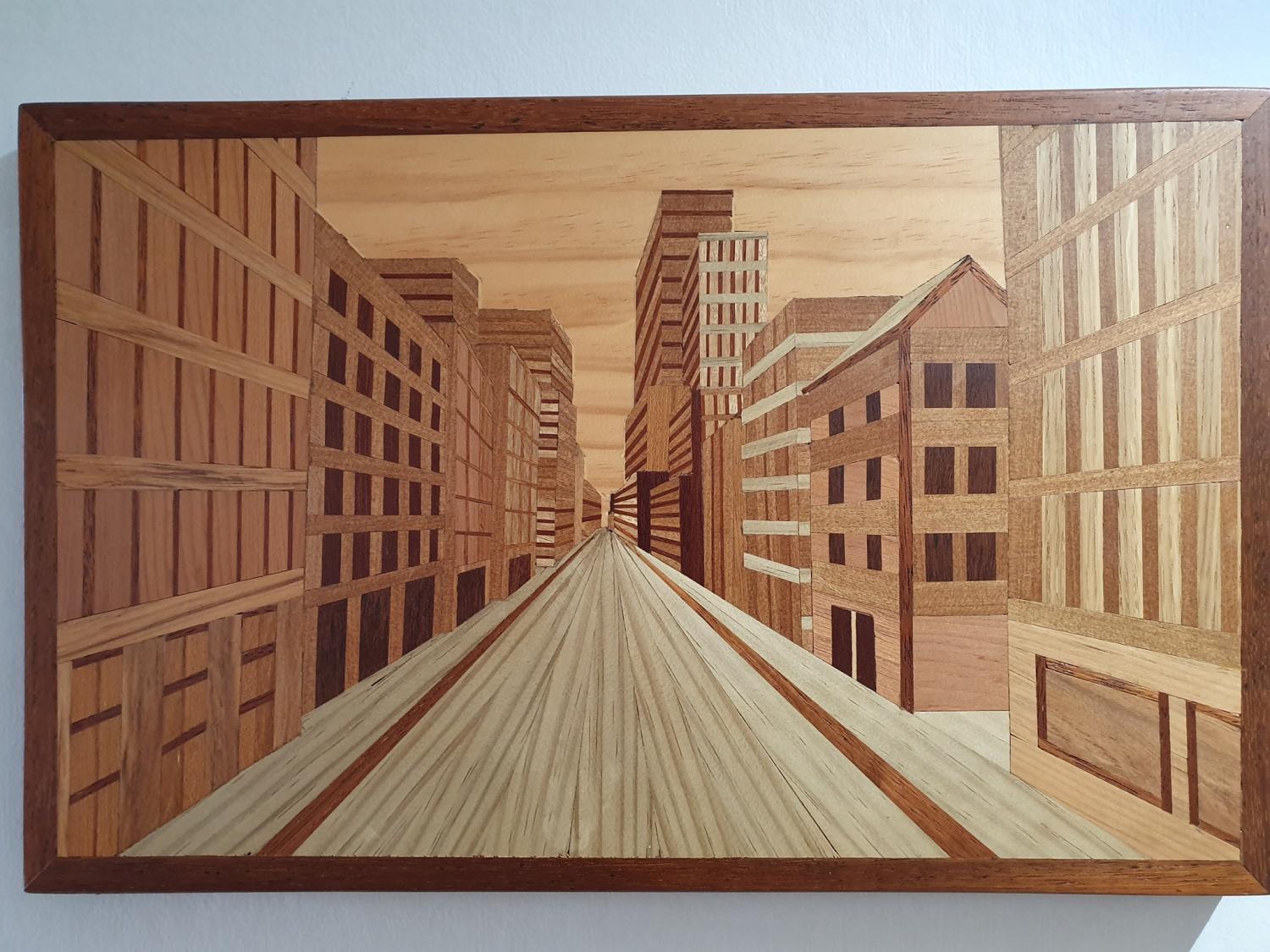 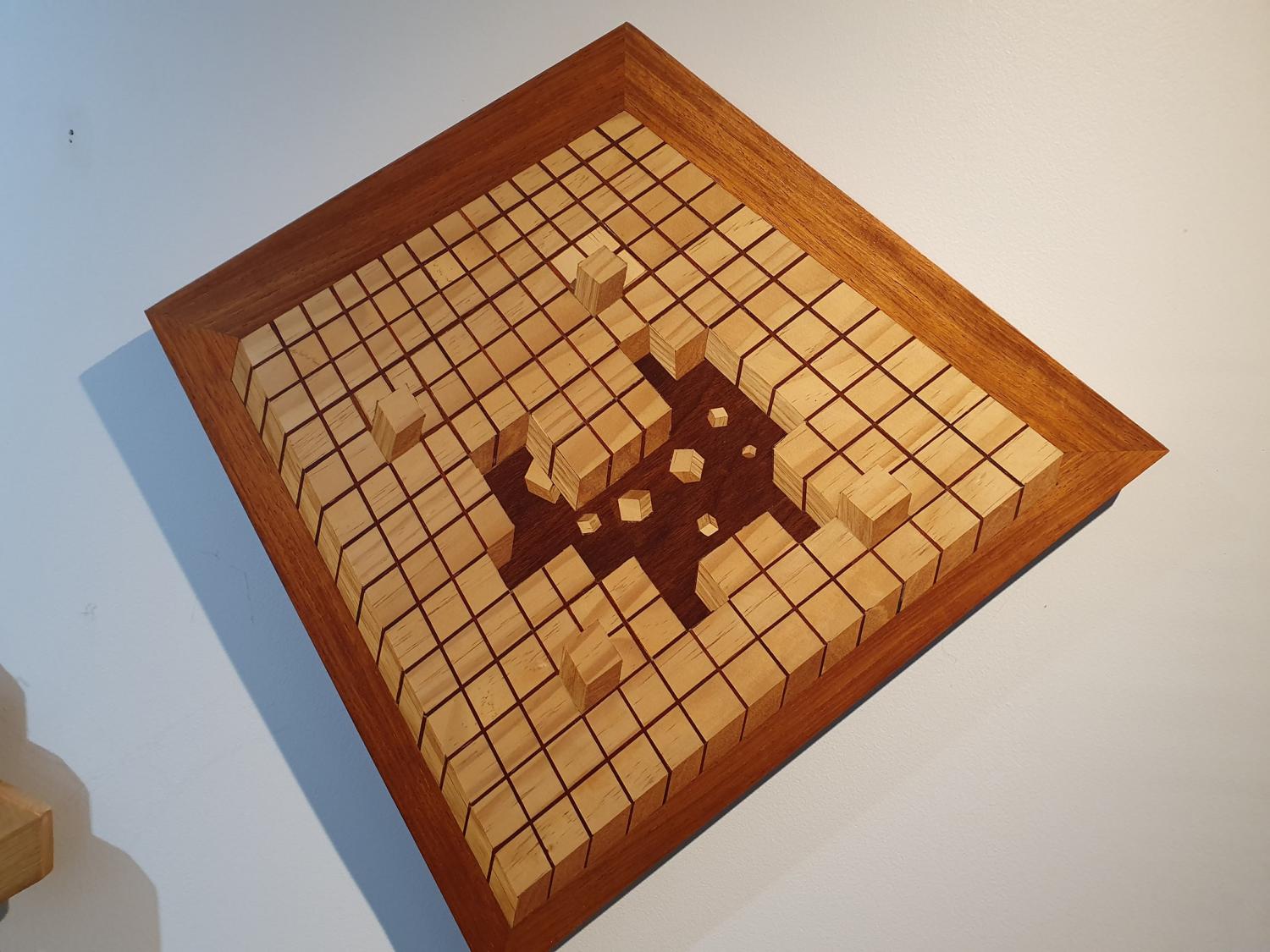