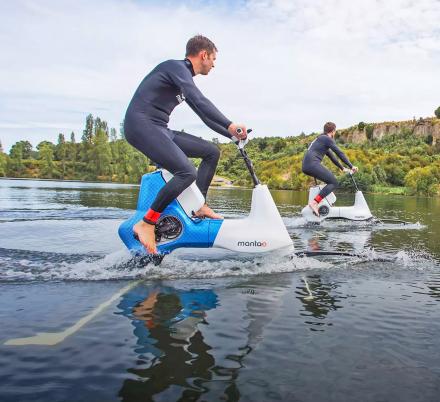 Biking on land is great and all, but have you ever thought about how awesome it would be to be able to ride your bicycle on water? You may remember the Shuttle Bike, which turns your existing bicycle into a watercraft. But this new water bicycle reinvents the way we can ride our bicycle on the water. It's a hydrofoil watercraft which means as you pedal the bike it will start to hover above the water, making it easier to pedal than it would normally be.

It's called the Mantra5 HYDROFOILER XE-1, and it's the world's first hydrofoil bike! It creates an unbelievable bicycle experience on practically any type of water, including oceans, lakes, rivers, waterways, etc. 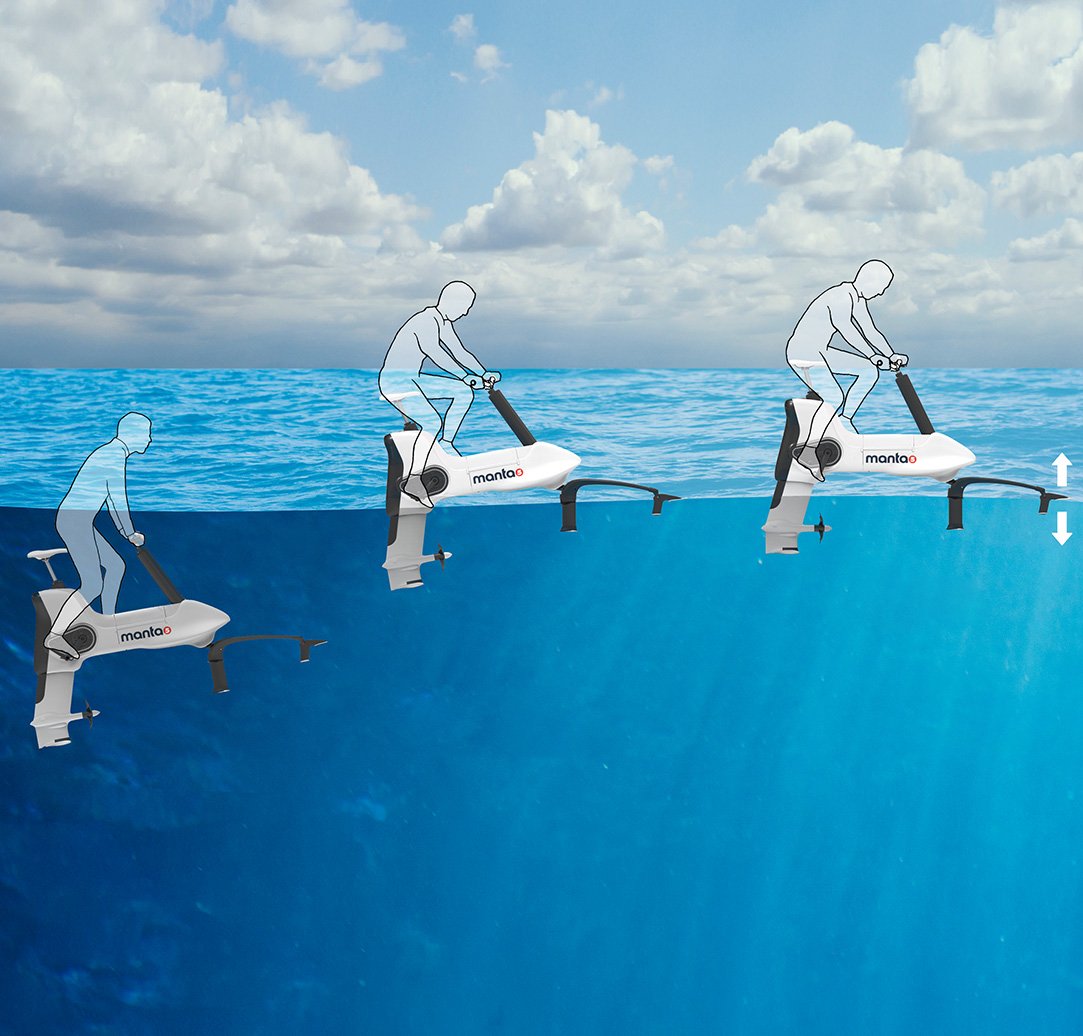 How Does The Hydrofoil Water Bicycle Work?

Although the hydrofoil water bicycle won't sink to the bottom when you put it water, it also won't float up out of water like you see in the pictures. When you put it into the water it actually barely float in the water. But when you sit on the seat and start pedaling, it'll start to propel the water bike forward which star to thrust the bike upward and right up out of the water. As the water in the lake/ocean passes under the wings on the underside of the water bike, it creates lift, almost like flying a plane.

Although getting the bike initially out of the water and starting to hover is a bit tricky and takes some practice, it does come with a pedal-assist feature which uses an electric motor to help lift the bike out of the water and continue to propel you forward at speeds of up to 13 mph. You will still need to continue pedaling and balancing on your own to keep the battery charged and prevent you from falling back into the water.

The XE-1 hydrofoil water bike includes is made from an aircraft-grade TIG-welded 6061-T6 aluminum frame, which makes it extremely lightweight but still durable. This also makes it resistant to corrosion from the water and salt. The giant wings underneath the water bicycle are made from carbon fiber which keeps the bike super lightweight, and they span a massive 6.5 feet wide.

Although the hydrofoil water bicycle looks big and bulky, it actually comes apart pretty easily so you can store it right in the back of your SUV or truck. The total weight is just 44 lbs (around the same as your average mountain bike), so you can easily haul it down to the water's edge and assemble it before taking it for a ride on the water.

Although the price tag of the hydrofoil water bicycle at just under $9k is steep, it's still an excellent idea for resorts and other lakeside, or oceanside companies to rent them out for guests to use by the hour like you would a Jet-ski or standup paddleboard.

The hydrofoil electric water bike has a rear wingspan that measures 6.5ft wide, along with a front wingspan of 4ft wide!

The water-based e-bike has a top speed of up to 12 mph, which is similar to traditional sailboats!

The company had a successful first run of small-scale pilot production in New Zealand, and are now taking the water bicycle to the full world-wide market!

It uses a traditionally chain and gear mechanism much like you'd find in a normal bicycle!

The internal battery which helps with powered pedal-assist takes around 4 hours to fully charge!

The water bicycle has 7 different levels of electric pedal assist that'll help you ride through the water. Turn it down for more of a workout, and turn the assist up for more assistance and to have a more leisurely ride!

Instead of a normal boat being steered through the rear of the boat, the Manta5 water bicycle is steered using the handlebars like a normal bicycle, and the rutter is placed in front of the e-bike!

The hybrid drivetrain on the water bicycle uses industry standard components for easy replacement if they ever need replacing.

The battery housing system and components of the e-bike are fully submersible in the water and are IPX8 rated!

Check out the Mantra5 Hydrofoil water bike in action via the video below.