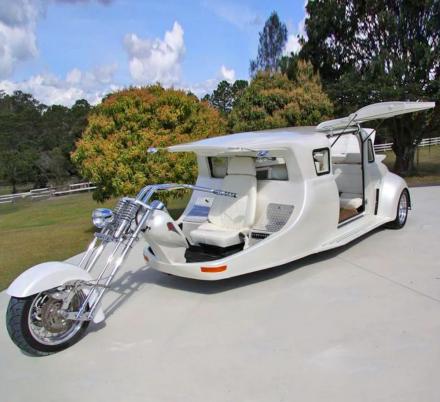 We all know a mullet consists of business up front, and party in the back. Well, now there's a bike that's pretty much the opposite of that. It's a party in the front, with pure business in the back. It's called the LimoBike, and it consists of a Harley Davidson motorcycle up front with one driver, and it pulls part of a classy limousine car behind it.

Perfect for Harley lovers that need to do some business meetings while on a motorcycle, the LimoBike will surely help you look down upon the peasants rolling in a pack of hogs. You can peek out the window of your LimoBike and snub your nose at all the peons while you sip a cup of tea.

What happens when a hardcore biker wants to rent a party bus? They take months to custom make this incredible motorcycle limo hybrid. No longer can a motorcycle haul around only 1 or 2 people. The Limo Motorcycle can fit a crowd of eight people, along with 1 person driving the LimoBike. So, barring a stripper pole in the middle, you can really have a good party in the back, or perhaps a nice business meeting depending on how you'd like to use it.

The limo motorcycle hybrid is a specialty rental that's owned by Wildfire Tours in Australia. It's a perfect way to arrive or depart from your wedding, or perhaps rent for a bachelor/bachelorette party. The inside contains everything you'd require for a luxury ride, including air-conditioning, a bar, flat screen television, tinted windows, vertically opening doors, and even a perch in the back that lets people stand up into the open air while cruising around.

The LimoBike measures nearly 20 feet long, and is made using nearly 1.75 tons of steel. It's made using a 2012 Harley Davidson motorcycle that's chopped up to attach the 8-person carriage onto the back of it. The bike is powered by a 5.7 liter, 350 HP V8 Chevy engine.

Check out the LimoBike in action via the video below.