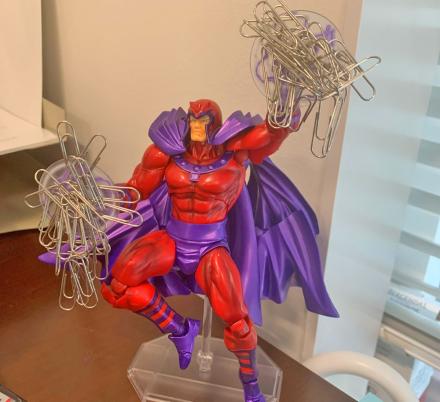 How often do we really use paperclips? Unless you're someone like an accountant or tax auditor that is constantly dealing with organizing papers, chances are you have a pile of paperclips in your desk that you haven't touched in years. Especially since most everything is digital and emailed instead of printed out anymore. Why not put those paperclips to good use and organize them in probably the coolest way possible with this Magneto paperclip holder?!

The unique X-Men desk figurine features magnetic hands that allow tons of paperclips to cling to each one of his hands. The figure can be used just as a regular figurine toy, but when the magnetic saucers are attached to his hands, they let you organize paperclips and any other small metallic objects to his hands to make it a really cool office organizer.

A perfect gift idea for geeks, X-men fans, Magneto fans, or just comic book lovers in general, the Magneto magnetic paperclip holder uses a detailed premium design and articulation, is made from high-quality ABS and PVC pre-painted plastic, is great for use in an office, a study, a desk, or bedroom. The X-Men Magneto magnetic paperclip organizer measures 6.3 inches tall, is fully posable in any way you like, and comes with a stand to have it stand-up anywhere.

Looking for more awesome and unique magnetic paperclip holders? Check out a few others that we found around the web below.